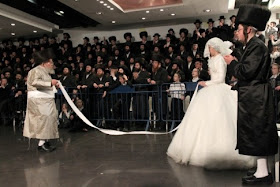 Many Chassidim have the custom of the "mitzvah tantz"  at a wedding:

The mitzvah tantz (mitzvah-dance) is the Hasidic custom of the men dancing with the bride on her wedding night, after the wedding feast. The bride stands perfectly still, holding one end of a long sash while rabbis, the groom’s father, her own father or her grandfather holds the other end and dances with her.

A video of a mitzvah tantz has been popping up in Arab social media, and the person who tweeted it said that the groom was tying the bride up, which is not in the least what was happening.

Admittedly, in this mitzvah tantz the father or rabbi is a bit too enthusiastic and not realizing that she has to spin around to avoid being indeed tied up. Circling the bride that many times in a mitzvah tantz seems unusual.

The tweeter said that if a Muslim would do that to his bride at his wedding, the world would be howling.

Well, yeah, if a groom tied up his wife it would look pretty bad!

Naturally, Arabic media picked up on the false story.
We have lots of ideas, but we need more resources to be even more effective. Please donate today to help get the message out and to help defend Israel.
Elder of Ziyon at Tuesday, September 17, 2019
‹
›
Home
View web version