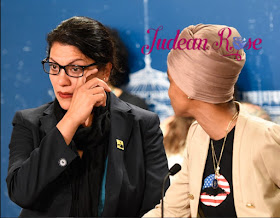 Rashida Tlaib made a tearful statement to the press on Monday, expressing her need to “expose the truth” about Israel, which she calls “Palestine.”


Much of what she says is inaccurate and lacks context, which makes it a lie. This for instance:

“As a young girl, visiting Palestine to see my grandparents and extended family, I watched as my mother had to go through dehumanizing checkpoints -- even though she was a United States citizen and proud American. I was there when there when my [grandmother] was in a terrible car accident and my cousins and I cried so she could have access to the best hospitals -- which were in Jerusalem.”

For one thing, it is doubtful Tlaib ever saw her family go through checkpoints "as a young girl" as there were no checkpoints when Tlaib was small.


Another lie by Tlaib.

She was a young girl in the 80's / early 90's at best. That was before checkpoints when Israelis & Palestinians easily crossed over into each other's territory, relatively safely. Before Oslo & the installation of Arafat's terror government. https://t.co/ATaKyQYy2u
— Chaim Redmann (@The_Bear_Jew18) August 20, 2019

I won't lie: It is true that when the soldiers at the checkpoints see I am Jewish, they wave me through, knowing that I am not going to Jerusalem to blow up a bus or smuggle arms.
Other people do get stopped and checked. Some more thoroughly than others. It depends on how much suspicion these people arouse, and yes, whether or not they are Arabs. Profiling like this saves lives. That is because in Israel, the people who perpetrate terror attacks are Arabs.
And even with the checkpoints, with soldiers looking in at the drivers, one by one, as cars pass through, we sometimes fail to catch terrorists, as this tweet from Frimet Roth demonstrates:

Rep Tlaib cried about her mother being "dehumanized" at Israeli checkpoints. My child Malki, a US citizen murdered at 15, would be here today had a checkpoint stopped her murderer and a 10 kg bomb from entering Jerusalem. Remind Tlaib: Checkpoints prevent terrorism - save lives. https://t.co/6KD0l7rdhn
— Frimet Roth (@FrimetRoth) August 20, 2019

While checkpoints save lives, we do of course understand that everyone should have access to medical care. And there is no doubt that Tlaib’s family would have wanted her grandmother to have access to the best possible hospitals after a bad car accident. But why, with the world pouring billions of dollars in aid into UNRWA and the PA, have the Arabs not built their own good hospitals, closer to home? Why should Muftia Tlaib be required to travel, at all?
The answer is this: the aid that goes to the PA and Hamas is used to fund terror, not hospitals. And that is a choice. With all that money, dozens of state-of-the-art hospitals could have been built in Judea, Samaria, and Gaza for the exclusive use of the Arab people. Better hospitals than the Jews have in Jerusalem, which would obviate the need for travel, passing  "dehumanizing" checkpoints, and ensuring that people like Tlaib's "sity" get help on the spot.
But the Arab people choose not to build hospitals. They choose instead to use the monies they receive to fund the murder of Jewish Israelis. Weapons cost money. So do the Pay to Slay salaries for terrorists and their families.

This Palestinian Authority-sanctioned policy of supporting and inciting terror over building hospitals makes it necessary to create even more “dehumanizing” checkpoints, even while PA constituents lack adequate and sometimes even urgent medical care. The Arabs have put the murder of the Jews ahead of the health of their own people. Murdering Jews is their top priority.

And why, after all,  should this money not be spent on the Jew-killing machine? PA and Hamas leaders and their families are well provided for: they have no difficulty obtaining medical care inside the State of Israel. Senior PA leader Jibril Rajoub was treated in an Israeli hospital in May. Hamas terrorist leader Ismail Haniyeh and four of his family members received treatment in Israel. PA President Mahmoud Abbas and three of his family members were treated in Israel. Why would these senior officials earmark funds for the medical care of people like Tlaib's "sity" when it doesn't affect them personally?

Putting terror first, and putting the haves before the have nots, explains the tragic disparity between available funding and the lack of medical care for the Arab people of Judea, Samaria, and Gaza, people like Tlaib's "sity." There should be no need for these people to travel to Jerusalem after a bad car accident. There is enough money to build hospitals and urgent care centers for everyone, very close to home.
This choice: choosing to murder Jews over providing medical care to your own people, is sick and wrong. Especially when corrupt leaders have the access to medical care that their people do not. But to cast the blame on Israel for these awful priorities, for these choices, and to then cry crocodile tears at press conferences in your official capacity as a public servant, as Tlaib has done, is even more wrong. It is an abuse of power. And it does nothing to help the Arab people.
Israel is not to blame for the choices made by Tlaib’s own people. Israel is, on the contrary, one of the two victims of this choice, this unquenchable thirst to shed Jewish blood; the other being the Arab people, who lack adequate medical care as a result of their grim and tragic priorities.
It is true that checkpoint solders waved me through as I labored with my 12 children on the way to Jerusalem. They might well have waved through Rashida’s “sity” after her car accident, too, except for the fact that Arabs have historically misused medical services for nefarious ends, for instance for the smuggling of bombs past the checkpoint in order to blow up Jewish Israelis in Jerusalem. From the Ministry of Foreign Affairs (MFA):

Unfortunately, there have been documented cases of Palestinians abusing the neutrality of ambulances and medical facilities for terrorist purposes. On March 26 2002, Ahmed Jibril, a Tanzim operative, was detained at an IDF roadblock near Ramah Bridge, south of Ramallah. Jibril worked as an ambulance driver for the Palestinian Red Crescent (PRC). He was arrested while driving an ambulance belonging to the PRC in which were found an explosives belt and explosives. Jibril admitted that Mahmoud Titi, a Tanzim leader in Samaria, told him to deliver them to Tanzim operatives in Ramallah.

In addition to Jibril, a woman and three children, aged 6 months, three and four years old, were in the ambulance. The explosives belt held sixteen pipes containing approximately 10 kilograms of explosive materials. The belt was hidden under the mattress of the stretcher on which one of the children was lying.

Nidal Abd al Fatah Abdallah Nidal, an ambulance driver from Qalqilya employed by UNWRA, was arrested in August 2002 by IDF forces. He admitted using the ambulance to transport weapons and explosives for Hammas. Waffa Idris, a PRC employee, perpetrated the suicide bombing on Jaffa Street in Jerusalem in January 2002. She was dispatched by a PRC ambulance driver who is also a Tanzim operative, and she was assisted by another PRC employee. It is also believed she may have traveled in a PRC vehicle, and used PRC documents to go through IDF checkpoints.

I have been in Israel for four decades, now. I remember these incidents and others, too. It is a known thing: Arab terrorists smuggle arms in ambulances, even placing them under the body of a child. How then can we simply wave Tlaib’s “sity” through a checkpoint after a bad car accident? We want to help. We are good people. But too many Arabs are not.
The MFA website explains Israel's humanitarian predicament:
These incidents are not exceptional. There have been others in which Palestinian terror organizations abused the privileged status of ambulances, as well as many intelligence warnings of their intentions to do so. There is also abundant evidence that terrorists operate from within hospitals and health clinics; that terrorist organizations recruit PRC employees; and that wanted terrorists frequently travel in Palestinian ambulances to escape capture.

In light of these Palestinian practices, the IDF is forced to stop and search ambulances, which unavoidably results in impacting the Palestinian population, despite the IDF's efforts to minimize the disruption caused.

International law may mandate safeguarding the neutrality of ambulances, medical transports and personnel. However, it has also long recognized that when ambulances and medical transport are used for military purposes, they can no longer keep their protected status.

Should we choose to let ambulances through unchecked, taking a chance on the lives of innocent Jews? Or should we trust the Arab passengers of these vehicles, knowing the history, knowing they have abused this trust in the past--Israel's trust--on several occasions?

Ambulances are something most of us see as sacrosanct: something never to be weaponized. This is the issue that Tlaib should be tearfully addressing from her platform of power: how to fix her people so they no longer breech these basic human standards of decency, no longer exploit Israel’s humanitarian impulses, so that Israelis no longer need fear them--fear for their lives--when an ambulance carrying wounded Arabs rushes by. Because ambulances just like the one that carried her “sity” have been used to carry explosives to murder Jewish Israelis, simply because they were Jews.

This, and not some pretend lack of Israeli humanity is the reason for the “dehumanizing” checkpoints: Arab terrorists who exploit Israel’s good nature, who exploit ambulances and other medical services, using them as tools to murder Jews.

This is the reason for the checkpoints in the first place: the Arab propensity for placing the murder of Jews above all else, even medical care for their own people. That is true crux of the problem. A problem Tlaib will never address.

We have lots of ideas, but we need more resources to be even more effective. Please donate today to help get the message out and to help defend Israel.
Varda Meyers Epstein (Judean Rose) at Wednesday, August 21, 2019
‹
›
Home
View web version