Chris Evans is the worst Mossad agent on film, ever: Review of The Red Sea Diving Club 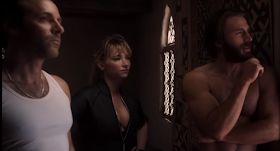 I had high hopes for The Red Sea Diving Club when I saw the trailer:

I already read some of the negative reviews of Netflix film before watching it last night, and they are on target: A great story was ruined by a screenwriter who evidently felt it would do better as a series of Hollywood cliches.

The often shirtless secret agent played by Chris Evans who goes against the rules. Who recruits his own group of misfit friends for an operation. Who recklessly endangers many lives because of his deep moral convictions. Who decides on the fly to turn the resort into a real hotel without any staff to speak of. Who ends up asking America to help with one last mission (where the US ambassador inexplicably ends up on the final trip to Israel.)

But beyond that, the movie shows a startlingly incompetent Mossad. Ben Kingsley's head of the organization has no control over his agents. Evans's Ari character was already fired twice from the agency, we are told, yet he is given free reign to come up with the unlikely plan of using an abandoned Red Sea resort as a cover for Israeli agents to smuggle Ethiopian refugees out via Sudan - and to present this plan himself to the Defense Minister, the only Israeli character in the movie who even attempts an Israeli accent.

Ari is told by his boss that there is no exfiltration plan to help him and his crew in case things go south. Really?

In his very first attempt to get 179 Beta Israel out of the country, Ari chooses to run through a roadblock - and to stop all communication with his Israeli counterparts and boss waiting on a ship at sea and in Israel, giving no valid excuse but they don't investigate what he does.

He's a rogue agent who knows better than his bosses. Yet he endangers the entire Ethiopian Jewish community with his reckless decisions at every turn.

The real story is actually much better than this contrived attempt to cash in on it. It had plenty of drama, but the Mossad is the real hero, not the roadblock for Chris Evans to play another kind of superhero.  Everything was planned meticulously, although there was real danger with each operation. The real life story of how the agents managed to secretly bring planes into Sudan is more impressive than the smuggling of people by boat shown in the movie, a method that was scrapped early on because it was too dangerous.

The worst and best part is the final credits.

The movie does not end with the audience being informed of how many Jews were saved from Ethiopia in this and other operations. It does not end with the William Safire quote, “For the first time in history, thousands of black people are brought into the country not in chains but as citizens.” No, the only takeaway is the generic "There are 65 million refugees in the world."

However, during the actual closing credits, photos of the actual saving of Ethiopian refugees and the real Mossad agents at the Arous on the Red Sea hotel (the real name of the resort) are shown.

There is a great movie in the story of the operation to save Jews from Ethiopia. Unfortunately, it isn't The Red Sea Diving Club.


We have lots of ideas, but we need more resources to be even more effective. Please donate today to help get the message out and to help defend Israel.
Elder of Ziyon at Thursday, August 01, 2019
‹
›
Home
View web version