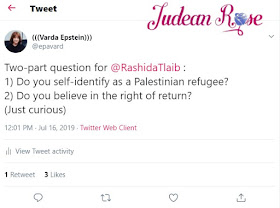 Rashida Tlaib, according to UNRWA, is a Palestinian refugee. It doesn’t matter that she wasn’t born anywhere near territory that was once part of the British Mandate for Palestine. Nor does it matter that far from being homeless or stateless, her American citizenship is so solid that she is a member of Congress. Rashida Tlaib, the UN has decided, is a refugee.

From Dr. Rephael Ben Ari:
“According to UNRWA’s original definition, a Palestinian refugee was a person whose normal place of residence had been Palestine between June 1946 and May 1948, who had lost his home and means of livelihood as a result of the 1948 war. Controversially, in 1965, UNRWA decided to create an extension of eligibility to the third generation of refugees – that is, to children of persons who were themselves born after 14 May 1948. In 1982, the Agency took another far-reaching decision to extend eligibility to all subsequent generations of descendants, without any limitation. Further deviating from the accepted norms and arrangements regarding refugees worldwide, UNRWA also registers as ‘refugees’ those who have acquired citizenship in other counties.”
Rashida Tlaib is eligible to register with UNRWA for assistance as a "Palestinian refugee." Tlaib, moreover, embraces the identity conferred upon her by UNRWA. She self-describes as a “Palestinian American.” This is distinct from Alexandria Ocasio-Cortez, for instance, who does not call herself a “Puerto Rican American.” 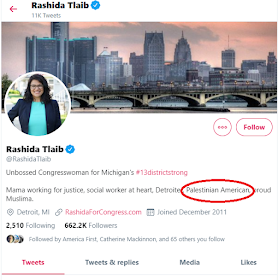 On winning her congressional seat,Tlaib wrapped herself in the “Palestinian” flag, a flag closely associated with the PLO.
Tlaib's identification as a Palestinian refugee extends to a belief in the right of return. From an interview with Valerie Vande Panne:
VVP: Where do you stand on Palestinian right of return—support or oppose?
Rashida Tlaib: Very supportive. I see what happened to African Americans in our country. I support right of return absolutely.
The right of return, which Tlaib supports, has as its aim the annihilation of Israel and the eradication of any Jewish presence in the Jewish State. This would be accomplished by flooding Israel, the indigenous territory of the Jewish people with some 6 million "Palestinian refugees." At this point, Jewish self-determination would be ended. For not only would the Jewish State no longer be Jewish, it would no longer be Israel. It would also no longer be safe for Jewish people to live there.

Some anti-Israel pundits, for instance Carolina Landsmann, at Haaretz, and Amy Addison at the Middle East Monitor, have suggested that in telling Tlaib to “go back where you came from,” the President, far from being racist, was supporting her right of return to “Palestine.”

So interesting to see “Progressive” Democrat Congresswomen, who originally came from countries whose governments are a complete and total catastrophe, the worst, most corrupt and inept anywhere in the world (if they even have a functioning government at all), now loudly......
— Donald J. Trump (@realDonaldTrump) July 14, 2019

Tlaib, meanwhile, has said she would vote against aid for Israel.
On Tlaib’s first day in office, she put up a map and covered the State of Israel with a post-it reading “Palestine.”

Someone has already made a slight alteration to the map that hangs in Rashida Tlaib’s new congressional office. pic.twitter.com/mwyshIog4r
— Hannah Allam (@HannahAllam) January 3, 2019

It is interesting that someone like Tlaib, who identifies as a Palestinian refugee with the right of return, can be a member of Congress: someone who is meant to put America first. But it is perhaps even more interesting that Tlaib began her term by accusing others of dual loyalties.
“They forgot what country they represent,” said Tlaib, in response to legislation introduced by Israel advocates to help states combat BDS.

But what country does Tlaib respresent? BDS, like the right of return, is a tool created with the express purpose of eradicating the Jewish State, albeit through economic privation. The idea is to squeeze the Jews until they leave. The founder of the BDS movement, Omar Barghouti, has been clear: "We oppose a Jewish state in any part of Palestine."

BDS and the right of return are antithetical to U.S. interests and sensibilities, not only because Israel is the one democracy in the Middle East. But because the aims of these movements are actually evil, going against every accepted standard of morality. These two values Tlaib holds dear, the right of return and BDS, are about booting the Jews from their ancient homeland; making them subservient to others; and endangering their very lives.

Rashida Tlaib believes in the merit of these tools of destruction of the Jewish State: the right of return and BDS. These are beliefs that are "Palestine"-centric. As such, we must conclude that far from having dual loyalties, Tlaib is loyal to a single country.

A mythical state called "Palestine."
We have lots of ideas, but we need more resources to be even more effective. Please donate today to help get the message out and to help defend Israel.
Varda Meyers Epstein (Judean Rose) at Wednesday, July 24, 2019
‹
›
Home
View web version