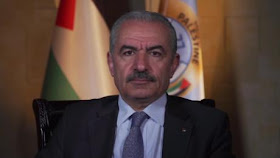 Today, Israel approved the building of 700 Arab homes in Area C of Judea and Samaria, something that anti-Israel activists have demanded for a long time.

Of course, no one is praising Israel for the move.

The criticism of Palestinian prime minister Mohammad Shtayyeh is more interesting than perhaps he realizes.

He said, "the terms A, B and C no longer exist because Israel has violated the Interim Oslo Agreement , And we do not need permission from the occupying power to build our homes on our territory."

When Shtayyeh says that Palestinians have the right to build anywhere in the territories, he is saying that the land is not legally occupied - but disputed.

Which has been Israel's legal position since 1967!

We have lots of ideas, but we need more resources to be even more effective. Please donate today to help get the message out and to help defend Israel.
Elder of Ziyon at Wednesday, July 31, 2019
‹
›
Home
View web version