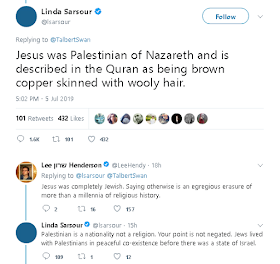 Jesus' physical attributes are not once mentioned in the Quran.

There are hadiths that do mention them, but they contradict each other - some saying straight hair, others curly; some say he had a dark complexion and others say white (and with freckles.)

It is all academic because Jesus was a Jew from Judea and most Jews from Judea at the time looked like Mizrahi Jews look today. Sarsour is trying to distinguish Jesus from other Jews and looks like an idiot.

Obviously, non-Quranic sources confirm that the Jews are a people, not just a religion.

Finally, Sarsour lies that Jews and Arabs (who she falsely calls "Palestinians" lived in peaceful co-existence before Israel was founded. The history of attacks by Arabs on Jews before Israel is quite extensive. Just in the single town of Tzfat (Safed,) Jews were attacked in 1517, 1660, 1834, 1838 and 1929.

That's about seven lies (Jesus was Palestinian, Quran describes his features, in Islamic tradition he is undoubtedly Semitic looking, Palestinian is a nationality, Palestine was a nation in Jesus' time, the Jewish people are not a nation, Jews lived peacefully with Arabs pre-1948) in two tweets.

Not bad, Linda. But I know you can do better.

UPDATE: Sarsour also is now claiming that Bethlehem is an Arabic name. 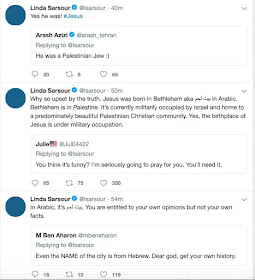 Apparently, whenever a place name is transliterated into Arabic, it becomes Arab.

We have lots of ideas, but we need more resources to be even more effective. Please donate today to help get the message out and to help defend Israel.
Elder of Ziyon at Sunday, July 07, 2019
‹
›
Home
View web version