If You Want to Help Israel, Stop Using the Word "Conflict" (Judean Rose)

If you really want to help Israel, please lose the word “conflict” from your vocabulary. There is no such thing as the Israeli-Palestinian conflict. A conflict is two sides attacking each other. This is simply not the case when it comes to Israel and the Arabs. The Arabs attack, the Israelis defend.
People like the notion of a “conflict.” It’s the American way. It’s tidy.
Americans like to think, “It takes two to tango,” which really means “It takes two parties to have a conflict and we prefer a conflict to one party attacking the other so let’s call it that."
It's not only Americans, of course. Progressives, in general, like to say things like, “There’s bloodshed on both sides,” as if the cause of blood being shed has no import, no weight. A dead murderer is equal in death to his victim, therefore the cause of death must be also be equal. One fact creates the other, in spite of the truth.

So if you have a home invasion and the cops come and shoot someone who just killed your family member, is that also "bloodshed on both sides?" https://t.co/6kdbEZxTqQ
— (((Varda Epstein))) (@epavard) July 16, 2019

Because people have this need for parity, for fairness. But this situation does not satisfy the necessary conditions that define conflict.

A conflict must have two parties at odds with each other. You don’t have that here. In the case of Israel, you have one side minding its own business and interests.


The losers, meanwhile, can’t cope with reality. They won’t make the best of a situation and you can’t make them. They prefer to maim, kill, and destroy: an adult version of the two-year-old tantrum, albeit an evil version. Because two-year-olds aren’t responsible in any moral sense for their choices. But adults, are.

In this case, the adults, who happen to be Arabs, know just how bad it is to, for instance, kill a ten-month-old infant in her stroller by sniper fire. This makes the act evil, which means that in no sense is such an attack at all like a two-year-old’s tantrum. It is, instead, a willful act of ugly violence. A deed of the Devil.

Anyone who describes the situation in Israel as a “conflict” needs to be told the story of Shalhevet Pass, HY”D. Because where’s the reciprocity in that? What did Shalhevet do to the man who murdered her? What was his “conflict” with her? Was she perhaps not wearing enough sunscreen that day?
“Conflict.” I hear the word and I shake my head. Because the murder of Shalhevet Pass is not even an isolated incident. Chaya Zissel Braun was only three months’ old when an Arab rammed his car with purpose into a waiting crowd of people at a train stop. Chaya Zissel was there with her parents, sitting in her stroller. She sailed into the street and then crashed into the pavement below, dead on impact. It was too fast for her parents to even try and stop the inevitable from happening.

But what did Chaya Zissel do to her murderer? Where is the conflict, the parity?
I will tell you where it is, what it is. It is this: Chaya Zissel was born a Jew. As was Shalhevet Pass, and Hadas Fogel, HY”D, who was the same age as Chaya Zissel when Arabs murdered her by decapitation, when she wouldn’t stop crying.

Ah! There you have it: she wouldn’t stop crying! A provocation if I ever heard one. Is this the locus of our "conflict?"
But no. It wasn’t about the crying. It was that Hadas Fogel was a Jew. Her mere existence was the sole locus of the "disagreement," the point of "conflict" between the "two warring parties."

This is important because so many believe that there really is a conflict and that it is about land. And the only way that any of this is connected to land is that the Arabs don’t want the Jews to have it. Land rights is a pretend issue, an excuse for Arabs to murder Jews. Because once you paint terror as a conflict about land, there's a focal point for disagreement. Which means two equal warring parties. Parties who can come to the table and negotiate. And since it's a land issue, negotiations means land concessions, which means Jews giving up bits and pieces of the Jewish State until there is nothing left.

Such a process of course, seen from a truer lens, is only Jewish victims rewarding those who murder them. Rewarding terror, alas, only makes them kill more of us to get more of what we have.

Think about it: if it were about land, why on earth would that make it okay to kill a baby? The baby is not responsible for where it is raised. The baby has no guilt, has stolen nothing, does not oppress you. It is just a baby. Something most societies hold as a value to protect and nurture.

The answer, of course, is that it is not about land, and it is not a conflict.

It is about Jews and Jewish continuity. The Jews who continue to live and the people who don't want them to. This is the locus of the conflict, the point of disagreement. 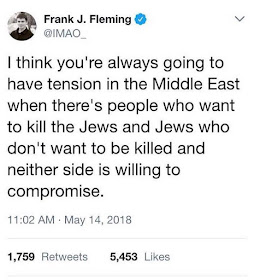 From that perspective, killing Jews is like killing ants or mosquitoes. There are no moral qualms. You step on one, slap at the other. The main thing is they die instead of crawling on your food, or stinging your arm.


Once we have established the fact that a Jew is something less than human, there is no issue of killing a person with a soul. It's killing a Jew! Knowing all this, why wait until a Jewish baby grows up? It will only do more damage, become harder to kill.
This process of dehumanizing Jews makes it possible for terrorists to kill innocent infants and other vulnerable populations. But depicting Arab terror as a conflict about land, offers terrorists something more: the freedom to kill Jews at will, with impunity. Because once there is a conflict, a thing with a focal point for disagreement, you have parity: two opposing sides. And where there is conflict, there are no murderers or victims. Only parties to a disagreement. Even when those "parties" are infants.

In a conflict, there's no question of guilt or blame or innocence. There are just two rivals lashing out at each other in perfect equality, both fighting for the same thing.

Which is so much nicer, after all, than thinking about the men who kill Jewish babies in their strollers and cribs, solely on the basis of their religion.
We have lots of ideas, but we need more resources to be even more effective. Please donate today to help get the message out and to help defend Israel.
Varda Meyers Epstein (Judean Rose) at Wednesday, July 17, 2019
‹
›
Home
View web version