According to The Guardian, Arab squatters have more rights than Jewish homeowners 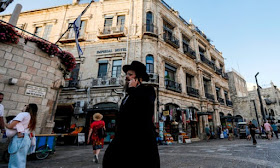 Background: A Jewish organization legally bought a hotel in the Old City of Jerusalem right inside Jaffa Gate.

The Guardian takes for granted that this is a huge crime.

Because obviously Jews have no right to Jerusalem.

According to Dajani, the settlers – who seek to create a Jewish majority throughout the Old City which, along with East Jerusalem, was annexed by Israel in the Arab-Israeli war of 1967 – are enacting “the rape of Jaffa Gate”.

Because obviously Jews have no right to Jerusalem.

Archbishop Theodosius Attulah, spokesperson for the Greek Orthodox church, criticised the supreme court decision, saying the sale was fraudulent. “The Christian properties have been a target for 70 years, but this is the most dangerous so far. It is aimed at marginalising Palestinian influence and weakening the Christian presence in the Old City. It will not be tolerated.

“Jerusalem is sacred to the three monotheistic religions, the purpose of the move is to transform the city into a place of hatred and struggle,” he said.

Because while the Archbishop might believe that Jerusalem is holy to Jews, they aren't allowed to buy land there. Buying land is a manifestation of hate, calling the buyers "rapists" is apparently Christian love.

The showdown is the culmination of a lengthy court wrangle dating back to a suspect secret sale of Greek Orthodox-owned properties to settlers, authorised by a now deposed Greek Patriarchate.

It is "now deposed" because it legally sold land to Jews!

The Greek Orthodox church, the largest private landowner in Israel and the occupied territories, has often sold property in East Jerusalem to Jewish settlers who deploy dubious means to secure deals.

Since the Arabs are bigots who threaten to kill anyone who sells land to Jews, yes, Jews who want to buy land have to jump through hoops. But to the Guardian, Jews have no rights, so - how dare they work so hard to get around Arab antisemitism

The New Imperial Hotel was sold behind Dajani’s back, despite the fact that he is a protected tenant, and the $1.8m deal for the three properties was signed by a Greek official who has since disappeared.

I am unaware of how a buyer of a property needs permission from the renters. But The Guardian believes this is true - at least when Jews are the buyers.

Dajani fears representatives of the settlers will seek entry to the hotel any day. He has been watching his security cameras and monitoring suspicious activity on hotel booking websites. He says he has learned that hotel “clients” linked to the settler group had taken rooms in the hotel through Booking.com and were already inside the property. He has closed the rooftop restaurant to prevent incursions from adjoining buildings.

Because illegal squatters have more rights than Jews who pay top dollar for the property.

Even so, looking across from the Imperial’s roof to the Dome of the Rock, the Church of the Holy Sepulchre, and the city’s other sacred sites, Dajani’s shoulders slumped a little. “We have to do the impossible,” he said. “When I look at the walls opposite, I see them cry, asking: ‘Where are the people who love Jerusalem?


(h/t Yosef)
We have lots of ideas, but we need more resources to be even more effective. Please donate today to help get the message out and to help defend Israel.
Elder of Ziyon at Monday, July 22, 2019
‹
›
Home
View web version