Why ban Hanan Ashrawi from the US? Let us count the reasons....

PLO official Hanan Ashrawi tweeted that she has been denied a visa request to visit the US.

I don't think she was rejected for being a grandmother.

Here are some possible reasons the US chose to reject her application:

- She has supported the Palestinian Authority paying terrorist salaries, calling it "social assistance to thousands of families permanently scarred by its illegal policy of mass incarceration and unchecked violence against Palestinians."

- At the outbreak of the second intifada, she expressed support for the terror spree, saying "The only language Sharon understands is the language of violence."

- In 2000, she justified the murder of Jewish civilians in Jerusalem, Judea, Samaria and Gaza, saying, "In a sense, the army of occupation and the settlers have become legitimate and select targets of Palestinian resistance." 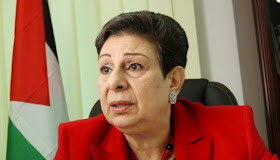 - Her NGO "Miftah" has published articles accusing Jews of the blood libel, and even after I exposed its support for antisemitism and terror it still, today, has articles that praise Palestinian female suicide bombers and other terrorists. Before being cleansed it had articles directly supporting suicide bombings.

- In 1995, she said in a speech that no "foreigners" (meaning Jews) should be allowed to immigrate to Israel.

- She has said that allowing Jews to peacefully visit the Temple Mount is a "declaration of war against Islam." (She is Christian.)

-Ashrawi rejects free speech, saying it should be prohibited to "defame" UNRWA.

-The PLO has rejected any talks with the US and even rejects accepting money. Why should the US not treat PLO members the same way?


We have lots of ideas, but we need more resources to be even more effective. Please donate today to help get the message out and to help defend Israel.
Elder of Ziyon at Tuesday, May 14, 2019
‹
›
Home
View web version