The Antisemites Have Escaped: No to Discipline, Apologies, Investigations, and Resolutions (Judean Rose) 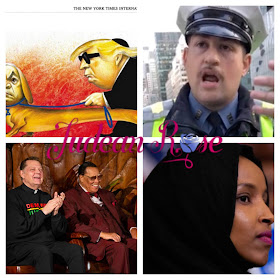 “We are taking disciplinary steps with the production editor who selected the cartoon for publication,” publisher A.G. Sulzberger said in a note sent to staff, according to CNN reporters posting excerpts Wednesday on Twitter.
“We are updating our unconscious bias training” to include “direct focus on antisemitism,” the note said.

The New York Times said that the editor who had chosen to publish an anti-Semitic cartoon in the Opinion pages of its international edition would be disciplined and that it had canceled the contract with the syndicate that provided the cartoon. https://t.co/xJRMnnf1I8
— The New York Times (@nytimes) May 2, 2019 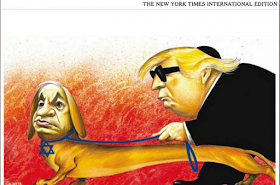 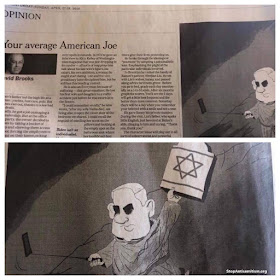 Dear New York Times,
No. Disciplinary action and bias training are not nearly enough. You need to fire this editor’s raggedy butt.
If you do not fire him, he, or the next editor who thinks about publishing antisemitic content, will know that they are free to do so. They will also know that the New York Times—a paper of record that represents and influences American sentiment—has no real problem with Jew-hatred.
Signed,
Unheard Jew
Cardinal Blase Cupich apologized to “my Jewish brothers and sisters” in a lengthy statement issued Friday, the night after Minister Louis Farrakhan “smeared the Jewish people” at Fr. Michael Pfleger’s St. Sabina Church.
Cupich laid the blame at Pfleger’s feet, saying the South Side priest did not consult Cupich before inviting the controversial leader of the Chicago-based Nation of Islam into his church.
“Minister Farrakhan could have taken the opportunity to deliver a unifying message of God’s love for all his children,” Cupich’s statement read. “Instead, he repeatedly smeared the Jewish people, using a combination of thinly veiled discriminatory rhetoric and outright slander.”
Cupich, leader of the Archdiocese of Chicago, made no mention of possible disciplinary action against Pfleger; he did “encourage” Pfleger to visit the Illinois Holocaust Museum “to meet with their leadership and dialogue with survivors.” 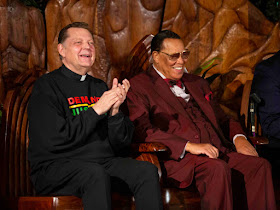 Dear Cardinal Cupich,
No. Your apology to my people is garbage. You need to send Pfleger to some nowhere, poverty-stricken parish in a third-world country, or better yet, have him laicized.
If you do not do so, he, or the next priest who thinks about inviting Farrakhan to speak, will be reassured that they are free to do so. They will also know that the Catholic Church you represent, which is led by the Pope—considered infallible by all Catholics—has no real problem with Jew-hatred.
Signed,
Unheard Jew

A motorist contacted YWN, saying he was on 57th Street and Park Avenue at 6:00PM Tuesday evening, trying to get into the Queens Midtown Tunnel. Due to traffic, the driver was unable to get out of the lane he was in, and attempted to make a turn. At that point, the Agent walked over to the vehicle, took a look at the Orthodox Jewish driver and his passenger, and told them “you can’t make a right turn, you stupid Jew”.

NYPD: "There is no room for intolerance in the NYPD, or anywhere.  Transportation Investigations Unit is reviewing this incident."

There is no room for intolerance in the NYPD, or anywhere. Transportation Investigations Unit is reviewing this incident.
— NYPD NEWS (@NYPDnews) May 9, 2019


Dear New York Police Department,
No. A “review” of this “incident” will not suffice. There’s video. An admission. The entire world knows he did this.
You need to fire this cop. To make him an example.
If you do not do so, he, or the next member of “New York’s finest” who thinks about hurling antisemitic insults at a Jew, will be reassured that they are free to do so. They will also know that the NYPD—sworn to protect all the people of New York, including Jewish people—has no real problem with Jew-hatred.
Signed,
Unheard Jew
After debates and delays over the wording of the text, the House on Thursday overwhelmingly passed a resolution that broadly condemned hate.
The resolution – which was crafted after freshman Rep. Ilhan Omar, D-Minnesota, made comments critical of Israel that detractors said played to anti-Semitic tropes – passed 407 to 23.
All Democrats voted in favor of the resolution, including Omar. Republicans were the only to oppose it, with one member voting as present.
The resolution was broadened from its original version, which focused solely on denouncing anti-Semitism, to condemning other forms of bigotry against minorities. 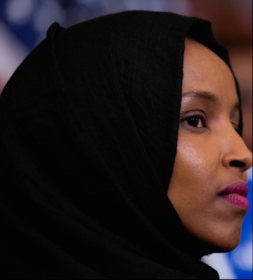 Dear Democrats,
No. Just no. Your watered-down resolution doesn’t fool us. Crafted with input from Omar herself, your resolution is actually harmful. It tells Americans that antisemitism is nothing special—that it is no different from any other hatred. This, at a time when antisemitism is not only rising in America, but exploding. (Unlike other forms of hatred.)
What you need to do: remove Omar from the House Foreign Affairs Committee.
Since you have not done so, Omar is free to weigh in on American policy regarding Israel, a country she said has "hypnotized the world."

Jew-haters like Omar and Tlaib know that the Democratic Party will not censure them for antisemitic comments. On the contrary, the Democratic party will stand by them, which is the same as supporting their hate. This is what the Democratic Party has done by issuing a resolution which lumps Jew-hatred together with all other forms of prejudice. It's what the Democratic Party has done by giving Omar a voice on America's policy toward Israel in the House Foreign Affairs Committee.
The thing is, it’s not just that you don’t have a problem with Jew-hatred. It’s that your party—the party of tolerance—has come to not only tolerate antisemitism, but promote it, too.
Signed,
Unheard Jew
We have lots of ideas, but we need more resources to be even more effective. Please donate today to help get the message out and to help defend Israel.
Varda Meyers Epstein (Judean Rose) at Wednesday, May 15, 2019
‹
›
Home
View web version