But while Hill’s claim looks very much like a pathetic attempt to assert academic expertise, it’s noteworthy that he was apparently trying to create an aura of authority for a project he has been working on. As Hill announced: “I finished a film that devotes 20% to Mizrahis [i.e. Middle Eastern Jews]. And I talk about them regularly.”

The film Hill referred to is apparently “Black in the Holy Land”, and you can watch the trailer on YouTube – but before you do so, you should read an EoZ post from last February. Amazingly enough, the trailer for Hill’s “documentary” starts off with convicted terrorist Ali Jiddah, who “planted four hand grenades on Strauss Street in downtown Jerusalem in 1968. The blasts injured nine Israelis.”

Jiddah served 17 years in prison and was released in a prisoner swap. Since then, he has devoted himself to demonizing Israel, and as he told the Times of Israel a few years ago: “I am satisfied, and I am convinced that the work I am doing today is more effective than the bomb I planted in 1968.” 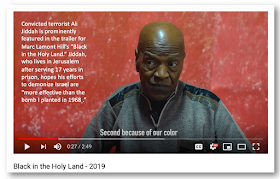 While the film is apparently not yet released, it’s clear what to expect: if your trailer prominently features a convicted terrorist who hopes to achieve with words what he previously tried to achieve with bombs, you really give your game away.

So it was hardly surprising that Marc Lamont Hill wasn’t pleased when well-known Israeli activist and writer Hen Mazzig recently wrote an excellent article that was published in the Los Angeles Times under the title “No, Israel isn’t a country of privileged and powerful white Europeans.”

If you missed the heated exchange that developed between Hen and Hill on social media, you can catch up by reading a Jerusalem Post report about it. Hill’s criticism of Hen’s widely read article included the preposterous claim that “the 20th century identity category of ‘Mizrahi’ [i.e. Middle Eastern Jews]” was created “as a means of detaching them from Palestinian identity.” According to Marc Lamont Hill, those who are now considered Mizrahi should apparently be called “Palestinian Jews” and we should all remember that they “lived peacefully with other Palestinians.”

Well, if Professor Hill studies “Yemeni and Moroccan Jews for a living,” he presumably knows that they cannot really be described as “Palestinian Jews.” Those Jews who lived among “other Palestinians” – meaning presumably the non-Jews in the area that the Romans designated as “Palestine” – had to endure the fate of an oppressed minority ruled by their conquerors. And if we want to consider the barely century-old history since the local Arabs actually started to consider themselves as Palestinians, we find that the Palestinian leader of the time was the man who started his career by instigating murderous pogroms, and who later became notorious as “Hitler’s mufti.” Incidentally, the mufti was an early proponent of boycotts and would arguably deserve to be honored as the father of BDS. Under his leadership, “‘Filasteen Arduna wa’al yahud Kilabuna’ (Palestine is our land and the Jews are our dogs)” and “‘Itbach al Yahud’ (slaughter the Jews)” were the first rallying cries of Palestinian nationalism in 1920.

For the narrative that undergirds Marc Lamont Hill’s vile anti-Israel activism, this history has to be ignored. It’s no less obscene than Rashida Tlaib’s recent attempt to rewrite history by claiming that the Palestinians somehow provided a “a safe haven” to Jews. But at least Tlaib doesn’t claim to be “one of the leading intellectual voices” in the US, and she doesn’t claim to “literally study Yemeni and Moroccan Jews for a living.” As it happens, my dearest friends include both a Yemeni and a Moroccan Jew, and if Marc Lamont Hill ‘studied’ them, he could learn a lot.

But as it is, we can anticipate that Hill’s forthcoming “documentary” will document first and foremost why Hill has fans both among supposedly “progressive” anti-Israel activists and virulent Jew-haters like Farrakhan’s Nation of Islam and David Duke.

Absurdly, @MarcLamontHill says "I literally study Yemeni and Moroccan Jews for a living" and he says they lived peacefully among Muslims.Ali Bey al Abbasi was the pen name of a traveler who described the lives of Jews in Morocco in 1805 quite differently. 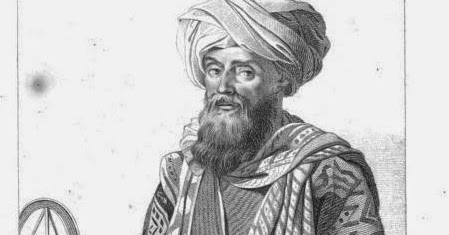 The misery of Jews of Morocco, 1805Blogging about Israel and the Arab world since, oh, forever.https://elderofziyon.blogspot.com/2014/11/the-misery-of-jews-of-morocco-1805.html 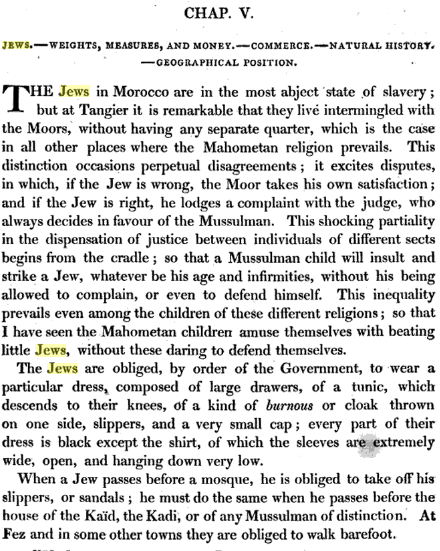 There are plenty of examples of contemporaneous studies of Jews in Morocco describing how they were humiliated, daily, by Muslims there.And Morocco was one of the best places for Jews to live!
Here you can see several attacks against Jews in Yemen between 1908 and 1913.Marc Lamont Hill is not a scholar. He wants to whitewash history, ,not describe it. This shows that his antipathy isn't against Zionists - but Jews.

We have lots of ideas, but we need more resources to be even more effective. Please donate today to help get the message out and to help defend Israel.
Elder of Ziyon at Thursday, May 23, 2019
‹
›
Home
View web version