Ilhan Omar has made it on the cover of Newsweek, in an article that effectively praises her for opening up the conversation in the Democratic Party to include anti-Israel and antisemitic comments.

The article says, "The diminutive Omar has emerged as the most voluble—and visible—of Israel’s critics. She appears to embrace the role of a political provocateur, particularly when it comes to foreign policy. Omar articulates a view that is rarely heard from a sitting member of Congress, one that has been forged from her first-hand experiences of war and exile."

Notice that her being a Muslim is not mentioned as a possible influence on her attitudes towards the Jewish state. Centuries of Islamic antisemitism is, of course, not allowed to be spoken of. Her hate of Israel and her antisemitic dog whistles are depicted as being honest and somehow a result of her experience in - Somalia.

The article goes on to feature Omar's criticism of AIPAC and then it quotes prominent AIPAC critic MJ Rosenberg for proof that she is right. It doesn't mention how small the pro-Israel lobby is in comparison with much larger domestic lobbies or even compared to the amount spent by foreign governments on lobbying the US. It only briefly mentions that Americans have other reasons to be pro-Israel outside of Washington politics.

Finally, Newsweek chooses pictures of Omar looking like a friendly fashion model, but a photo of Netanyahu is chosen when he is practically scowling. 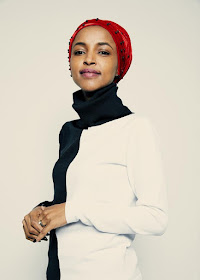 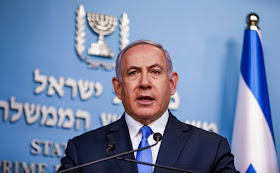 Israel has indeed emerged as a partisan issue, and this is not good. Republicans are just as guilty as Democrats in causing this situation. But the Democratic criticisms of Israel are often based on myths about Israeli "brutality" and the party is pandering to the most extreme socialist wing of the party whose lies about Israel come from a long line of Soviet talking points since the 1960s.

However, this article is only peripherally about partisanship on Israel. Ilhan Omar made comments that antisemites and white supremacists recognize as part of their own thinking, and she is being honored specifically for those comments with her smiling face on what may still be a major news magazine - raising her national profile in a huge way. Any other politician who would have done anything close to that speaking about any other minority would be roundly vilified without any caveats; Omar is being rewarded specifically because of her offensive comments.

That is immoral journalism.

We have lots of ideas, but we need more resources to be even more effective. Please donate today to help get the message out and to help defend Israel.
Elder of Ziyon at Wednesday, April 10, 2019
‹
›
Home
View web version