Does Moroccan King Mohammed VI realize that he just affirmed Jews' rights to worship on the Temple Mount?

Here is the full statement jointly signed by Pope Francis and King Mohammed VI in Morocco on Saturday:

On the occasion of the visit of His Holiness Pope Francis to the Kingdom of Morocco, His Holiness and His Majesty King Mohammed VI, recognizing the unique and sacred character of Jerusalem / Al-Quds Acharif, and deeply concerned for its spiritual significance and its special vocation as a city of peace, join in making the following appeal:

“We consider it important to preserve the Holy City of Jerusalem / Al-Quds Acharif as the common patrimony of humanity and especially the followers of the three monotheistic religions, as a place of encounter and as a symbol of peaceful coexistence, where mutual respect and dialogue can be cultivated.

To this end, the specific multi-religious character, the spiritual dimension and the particular cultural identity of Jerusalem / Al-Quds Acharif must be protected and promoted.

It is our hope, therefore, that in the Holy City, full freedom of access to the followers of the three monotheistic religions and their right to worship will be guaranteed, so that in Jerusalem / Al-Quds Acharif they may raise their prayers to God, the Creator of all, for a future of peace and fraternity on the earth”.

While it is presumptuous for Muslim and Christian leaders to sign a declaration on Jerusalem without including any Jews, this statement includes an assertion that every member of the three major monotheistic faiths should have full access to their holy spaces in order to worship there. 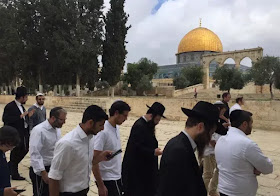 Which means that Jews have the full right not just to visit but even to pray at the Temple Mount, the holiest spot in Judaism.

King Mohammed's part of the statement is even more interesting because he chairs a committee created by the Organisation of Islamic Cooperation on Jerusalem.

The mere visits of Jews to the Temple Mount cause daily uproars in Arab and Muslim media, let alone the very rare expressions of prayer by Jews there (which I was privileged to witness and participate in last month.)

The only people trying to limit freedom of access and worship to all holy sites in Jerusalem are the Muslims. (And, ironically, the Israeli government which officially does not allow Jews to pray on the Temple Mount to maintain an antisemitic "status quo.")

This statement is fully compatible with international law on freedom of religion. But that hasn't stopped Muslims from protesting Jewish access not only to the Temple Mount but to all of Judaism's holiest sites, in Jerusalem, Bethlehem and Hebron.

Does King Mohammed realize what he just signed? Does the rest of the Muslim world?

We have lots of ideas, but we need more resources to be even more effective. Please donate today to help get the message out and to help defend Israel.
Elder of Ziyon at Monday, April 01, 2019
‹
›
Home
View web version