PCHR admits that "Al Amal Hotel", destroyed by Israel, was a Hamas headquarters 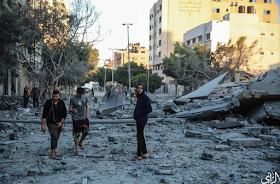 One of the "civilian buildings" that Israel destroyed in Gaza this week was called the Al Amal Hotel.

Articles in Arab and leftist media like +972 identified it as a hotel targeted by Israel among other war crimes.

The IDF said that the hotel wasn't a hotel but was the location of the Hamas interior ministry, where attacks against Israel were planned.

PCHR said "Israeli warplanes carried out 15 airstrikes, launching 57 missiles to target ...al-Amal Hotel which had become the Internal Security’s office that was only few meters away from the former head office of the Palestinian Center for Human Rights (PCHR)."

There is no record I can find since 2008 of anyone staying at the Al Amal Hotel. It hasn't been a hotel for years, but Arab propaganda media knowingly reported on the airstrike as if it was still a hotel. 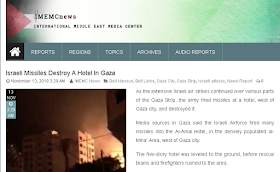 We have lots of ideas, but we need more resources to be even more effective. Please donate today to help get the message out and to help defend Israel.
Elder of Ziyon at Wednesday, November 14, 2018
‹
›
Home
View web version