Was the ancient boulder that fell from the Western Wall pushed from the Muslim side? (update) 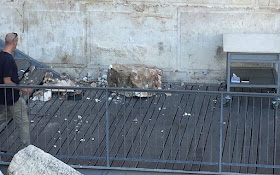 A large boulder from the Western Wall was dislodged from the ancient structure on Sunday morning, tumbling down onto an egalitarian prayer platform, which was empty at the time.

There were no reported injuries in the incident near Robinson’s Arch, south of the main prayer plaza.

...Al-Aqsa Mosque director Omar al-Kiswani denied that anyone on the Temple Mount pushed the rock down to the bottom.


I'll admit I'm no expert, but to me the stone looks like it was pushed with some force in the video above. The left part of the stone lands a couple of meters past the wall and then bounces back from the metal platform towards the Wall. It doesn't seem like a collapse.

Admittedly, though, it would take a great deal of force to push a boulder of that size.

I don't know exactly what is on the other side of the wall at that precise point, although it looks like it is the Islamic Museum.

I found a high resolution photo from 2013 (by RealJerusalemStreets) and identified the stone, which was cracked then: 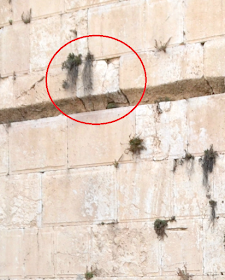 There are two reverse ledges that make it appear that the stone that fell may have been already a half meter or so further out than the wall at the base, so that might explain some of the distance it seemed to fall away from the wall.

I hope that the experts are looking at all possibilities.

UPDATE: Real Jerusalem Streets sent me this photo from shortly before the collapse. The crack definitely grew a lot in the past few years. 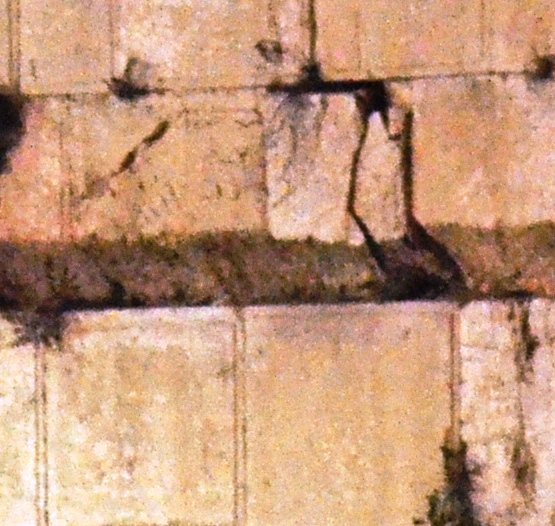 We have lots of ideas, but we need more resources to be even more effective. Please donate today to help get the message out and to help defend Israel.
Elder of Ziyon at Monday, July 23, 2018
‹
›
Home
View web version