Meanwhile, 60,000 cross between the West Bank and Jordan every week 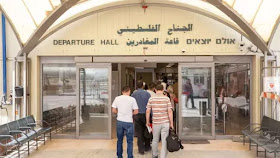 Palestine Press reports that about 60,000 people crossed the Allenby/King Hussein Bridge between Jordan and the West Bank last week.

30,718 people went to Jordan and  29,010 came the other direction, according to Palestinian police.

This was considered an average week, the statement said.

Palestinian police arrested 57 people on criminal charges for people crossing in both directions.

Israel has control over this and the other crossings to Jordan, and yet the fact that it allows so many people to freely move in both directions every week is at odds with the image that Palestinians and anti-Israel activists want to show the world.

For example, Gisha, the NGO that is concerned with freedom of movement for Palestinians, doesn't even publish statistics on how easily they can travel between the West Bank and Jordan on their Graphs page - only statistics about Gaza.

This sort of selective reporting is a way to obfuscate, rather than reveal, the truth.

If Gaza was not controlled by an Islamic extremist terror organization, the statistics on Gazans traveling to Egypt and through Israel to the West Bank would be much, much higher. But that is another fact that must be hidden from the world by NGOs that supposedly care about Palestinians but whose reports reveal they really only care to attack Israel.

We have lots of ideas, but we need more resources to be even more effective. Please donate today to help get the message out and to help defend Israel.
Elder of Ziyon at Friday, July 20, 2018
‹
›
Home
View web version