Arab media has been following the fires in Israel from Gaza kites and balloons far more closely than most Israeli media.

But the photo I saw this morning to illustrate the fires was exactly the type that the Arab media loves to show: 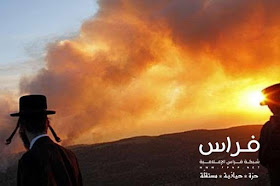 Further research shows that the same photo was used in April for Gaza fires.

This particular photo was taken during the catastrophic 2010 fires in Israel, many of which were Arab arson.


We have lots of ideas, but we need more resources to be even more effective. Please donate today to help get the message out and to help defend Israel.
Elder of Ziyon at Sunday, July 01, 2018
‹
›
Home
View web version