These Are Not Your Grandparents’ Goyim (Rivkah Lambert Adler) 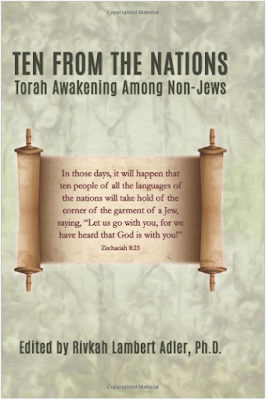 Varda Epstein’s recent review of my book Ten From The Nations: Torah Awakening Among Non-Jews offers me a perfect opportunity to elaborate on how I see the world and why I do what I do. To the best of my knowledge, Varda and I have met exactly once, fleetingly. Nevertheless, we maintain a mutually respectful, professional relationship and admire one another’s work. It’s important to mention that at the outset because, although our viewpoints differ on a number of issues, civility is important to both of us. And I thank Varda for her graciousness in giving me a chance to respond.
I spend a significant amount of time each week building bridges with people from the Nations. Most of them come from Christian backgrounds, although many of the people with whom I interact no longer consider themselves mainstream Christians. A huge part of what distinguishes them from the rest of the 2.2 billion Christians worldwide is their fascination with Israel, with the Torah and with the Jewish people. Although they identify variously as Christian Zionists, as Ephraimites, as Bnei Noach or as gerei toshav, they are united in their understanding that the Jewish people have something to offer them.
I believe we are in an unprecedented time in history when, after 2,000 years of anti-Semitic pogroms, forced conversions and murder of Jews by Christians, there are now Christians who are singing a whole new song to the Jewish people. These are the people whose stories I published in Ten From The Nations and whose spiritual longings to get closer to Israel and to authentic Torah I both admire and work to nurture. In a nutshell, these are not your grandparents’ goyim. These are not the non-Jews you’ve been taught to fear, mistrust and hold at arm’s length.
I was raised to mistrust non-Jews at worst and to see them as irrelevant to my life at best. Since becoming involved in this work, my viewpoint has changed. It took a series of paradigm shifts for me to get to where I am now.
As I see it, Varda and I differ in our understanding about three main issues.

A) Do all Christians have a missionizing agenda?
B) To whom does the Torah belong?
C) Do the Jewish people have any responsibility to non-Jews?
I’ll address these one at a time.
Do all Christians have a missionizing agenda? I believe that the vast majority still do. At the same time, I have personally met hundreds of people coming from Christian backgrounds who actively repent for the sins that have been committed against the Jewish people for 2,000 years. They have put to rest the fallacious and destructive ideas behind Replacement Theology and no longer believe that Christianity replaced Torah and that Christians replaced the Jewish people in God’s eyes. In the main, it was the return of the Jewish people to the Land of Israel that rocked their theology and caused them to reexamine the most fundamental truths they had been taught. Rather than being the “strange ducks” that Varda suggests, I believe they are spiritual leaders who buck the potent forces of convention to follow Truth.

It has been suggested that only 1% of Christians today have renounced Replacement Theology. On the one hand, 1% is a tiny minority. On the other hand, 1% is 22 million people.  And that’s enough to keep me busy for the rest of my life.
I wish to be very clear. I find the proselytizing of Jews odious. I have zero tolerance for it. The relationships I build with people from the Nations are based on mutual respect. We agree to let our differences be settled by God at the End of Days. In the meantime, we inhabit the space where our worldviews overlap – a love of God, a love for Israel, a longing for Torah and a joy at seeing Biblical prophecy fulfilled in our days.

To whom does the Torah belong? I used to believe that Torah was the exclusive property of the Jewish people and its precepts were for us alone. Over time, the words of the Torah itself convinced me that it was intended, from the beginning, to be shared with the Nations. I believe that the Jewish people were tasked with being guardians of the Torah – until the rest of the world was ready for its teachings. Then we were intended to become the teachers of Torah to people from the Nations, while maintaining our unique relationship with God’s Holy texts.
Do the Jewish people have any responsibility to non-Jews? There are dozens of verses in Tanach, and also in our liturgy, even during Rosh Hashana and Yom Kippur, that speak of a time when the entire world will worship the One True God, the God of Israel. I believe that time has dawned. The shift is already taking place. Just as it says in the Book of Zechariah, people from the Nations are aligning with the Jewish people and begging, “Teach us about God.” This is unprecedented and the exact thing for which we have been preparing for 3,300 years.
Varda wrote, “Being a ‘light unto the nations’ doesn’t mean preaching Torah to them. It means being a good and moral example. No more, no less.” I also used to think exactly as she does. Now I see things differently. Today, I understand that fulfilling our God-given role as Ohr LaGoyim means that, when the Nations are receptive, we are obligated to teach them. Without question, the people I teach are desperately hungry for authentic Torah. It may not yet be the tafkid of the Jewish people as a whole, but I believe that Hashem has given this task to me personally, to serve among the group of Jews who are willing to build bridges with people from the Nations, using Torah as a primary tool.

Varda wrote, “I don’t understand why any Jew wants to help these people, instead of their own people, as a calling. I think that’s bizarre.” Working with non-Jews is an important part of my life, but it is not the only thing I do in life. For me, it’s not “instead of”. Rather it is “in addition to”. We are not all intended to do the same work in the world. Each of us is uniquely qualified for certain tasks. I believe, with all my heart and soul, that Hashem chose this challenging work for me personally. As Varda correctly said, I do indeed see it as holy work.

It would be misleading if I didn’t acknowledge that there are landmines in this work. There are things I see, hear and read that make the Jew in me cringe. All is not sweetness and light. We are building something new and it’s a huge and, oftentimes, messy job. I accept that as part of the process. I see Hashem’s Hand in bringing geula closer by re-aligning the relationship between Jews and people from the Nations. I can be patient.
I realize that, no matter what I say, there are people who will remain unconvinced. I accept that as part of the nature of what I do. If you have questions you’d like to ask me, I can be reached at editor@tenfromthenations.com. I’m happy to conduct a respectful dialogue with anyone who is interested.


We have lots of ideas, but we need more resources to be even more effective. Please donate today to help get the message out and to help defend Israel.
Varda Meyers Epstein (Judean Rose) at Wednesday, June 13, 2018
‹
›
Home
View web version