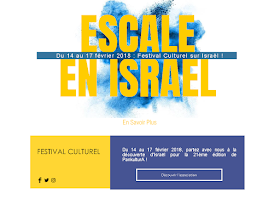 AFP (French) reports that a festival called "Stopover in Israel", in Lille, was canceled by the students who organized it as part of a university project.

It was meant to be a four day festival of Israeli culture, but anti-Israel activists came to demonstrate at the first cultural workshop on Wednesday evening, which was a photography exhibition and Hebrew lessons.

Organized by an association composed of fifteen students from the Institute of Business Administration (IAE) of Lille, attached to the University of Lille 1, the festival was to offer, for four days, workshops to discover the Israeli culture, including cooking and music.

"The protesters told us that they were coming to demonstrate at all our activities. So we decided to stop. We do not want to create more controversy on this, " Gaëlle Robin, student in charge of press relations within the association, told AFP. "We were neutral, we said that there was nothing political or religious [...] Our project has been approved" by the institution, she added.

On Wednesday, a letter signed by two professors was sent to the president of the university asking for the cancellation of the festival. "Mr. President, to authorize a demonstration which, under cover of cultural openness, is an apology for this State [ Israel ] shocked us deeply," write Moussa Nait Abdelaziz and Abdellatif Imad. "Would we have agreed to hold a watered-down demonstration on South Africa during the days of Apartheid and Mandela in prison? "

The haters exercised their veto power with their threats, and the pro-Israel students caved without a fight.

Which means that the next time it will be even harder.

Will there be any pushback in France over a mob having veto power over basic free speech?


We have lots of ideas, but we need more resources to be even more effective. Please donate today to help get the message out and to help defend Israel.
Elder of Ziyon at Friday, February 16, 2018
‹
›
Home
View web version