Iran says Trump's declaration will hasten Israel's destruction. So shouldn't they be happy? 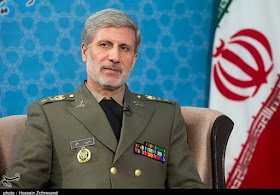 
Iran’s minister of defense said the US administration’s provocative decision to recognize the city of al-Quds (Jerusalem) as the new capital of Israel is going to accelerate the demise of the Zionist regime.

The White House’s move to declare Quds the capital of the fake Zionist regime will bring closer the end of the Israeli regime and strengthen Muslim unity, Brigadier General Amir Hatami said in a gathering of Defense Ministry officials in Tehran on Monday.

Slamming the US president for his “provocative and unwise” decision about al-Quds, the general said the Israeli occupiers would never experience calm and have no way but to leave the Palestinian territories.

He further held the US and Israel accountable for the escalation of tensions and bloodshed in the region, saying the US president should accept responsibility for his “anti-security decision.”

Leader of the Islamic Revolution Ayatollah Seyed Ali Khamenei has described the US controversial move as a sign of “weakness and incompetence”, saying, “The Islamic world will definitely stand against this plot and the Zionists will receive a bigger blow.”

Hold on: Don't the Iranians want to hasten Israel's destruction?

Aren't they pining for more bloodshed?

Don't they like when the US makes stupid mistakes?

Why aren't they happy? They should be celebrating!

To increase their happiness at hastening Israel's demise, we should definitely have other Western nations move their embassies, too.

We have lots of ideas, but we need more resources to be even more effective. Please donate today to help get the message out and to help defend Israel.
Elder of Ziyon at Tuesday, December 12, 2017
‹
›
Home
View web version