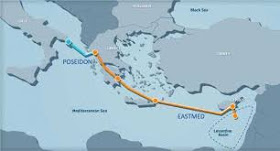 This is a story that would be considered important in a sane world. It happened last week and was barely covered.

On December 5, Greece, Cyprus, Italy and Israel signed a memorandum of understanding for constructing an underwater gas pipeline from the Eastern Mediterranean region to Greece and Italy, which will allow the transportation of newly discovered Cypriot and Israeli gas reserves to mainland Europe.

At an energy summit in Nicosia, Cyprus’ Energy Minister Yiorgos Lakkotrypis and his Greek and Israeli counterparts Giorgos Stathakis and Yuval Steinitz as well Italian ambassador in Cyprus Andrea Cvallari, who represented Italy’s Energy Minister Carlo Calenda, signed the document for the promotion of the East Med pipeline in Cyprus on December 5.
...
For his part, Steinitz was quoted as saying that the East Med pipeline is “very realistic” and could help secure Europe’s energy future.

EastMed will connect Israel’s Leviathan and Cyprus’ Aphrodite gas fields to Greece and Italy. The initial estimate of the cost of the pipeline, which will be able to transport 12-16 billion cubic metres of gas per year, is around $6 billion.

The next step will be the signing of an intergovernmental agreement in Crete in the spring of 2018.

We have lots of ideas, but we need more resources to be even more effective. Please donate today to help get the message out and to help defend Israel.
Elder of Ziyon at Monday, December 11, 2017
‹
›
Home
View web version