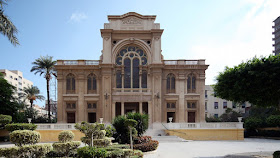 Egypt's el Fagr reports that an Alexandria lawyer and coordinator of the Revolutionary Lawyers Movement, Sherif Jadallah, has filed a complaint with the Attar District Court demanding the banning of any Jew from entering the Great Synagogue in Alexandria and allowing Muslims to perform the five daily prayers inside the synagogue.

Jadallah says this has nothing to do with the US recognizing Jerusalem as Israel's capital. Instead, he claims it is a response to Israel banning Muslims from the Al aqsa Mosque for a few days earlier this year after three terrorists used it as a base to murder Jews.

"The Jewish religious intransigence and persecution of Muslims must be met with a clear popular legal response to the prohibition of Jewish religious rituals and to allow us to perform Islamic religious rites within their Jewish temples," Jadallah said, in accordance with what he laughably called a principle in international law called "reciprocity."

The lawyer is targeting December 29th to ban Jewish worship in the synagogue and allow Muslims to take it over.

Now that there are nearly no Jews in Egypt, the country has been spending money to restore their old synagogues - for tourists, but not for prayer.

I'm sure that Muslims who claim that they have nothing against Jews will write irate articles about this in the Arabic press.


We have lots of ideas, but we need more resources to be even more effective. Please donate today to help get the message out and to help defend Israel.
Elder of Ziyon at Sunday, December 10, 2017
‹
›
Home
View web version