No Safe Spaces for Jews at Rutgers (Judean Rose) 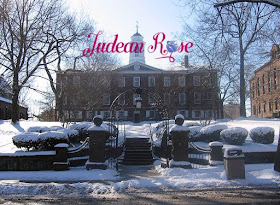 Intimate that once, a long time ago, a senator or celebrity touched someone inappropriately or without permission and the media is on it like white on rice and #MeToo hashtags on Twitter. Refuse to make a wedding cake for a gay couple, and you lose everything you own. Get shot at by a white officer for robbing a convenience store while black, you spawn an entire movement and Beyoncé will dance your story at halftime.

But at Rutgers, professors who hate Israel and the Jews are free to use the classroom to spout their lies and their hate and if Jewish students speak out, they're told it's "free speech." They're told they have no recourse. They must put up and shut up.

Now it's important to note that in the U.S., there has been a huge spike—a 67% increase—in antisemitic incidents this past year compared with 2016. Note too, that Rutgers has the largest percentage of Jewish students of all U.S. campuses. Depending on whether those Jewish students are New Jersey residents or from out of state, their parents may be paying upwards of $15,000 for them to be taught to hate Israel and to be ashamed of being Jewish.

An exaggeration, you say? Let's take a look.

We've got microbiology professor Michael Chikindas, exposed by Israellycool's Aussie Dave, for posting antisemitic cartoons and sentiments worthy of Der Stürmer. Chikindas is not just a Jew-hater, he also seems to be insane. The things he writes! From Algemeiner:

After sharing an article claiming to expose the “global elite,” he wrote, “These jewish motherf*****s do not control me. They can go and f**k each other in their fat a***s — you see, I really do not have anything to loose (sic), hence nothing to be controlled.”

I don't know about you, but I would not want this insane Jew-hater (who cannot spell) anywhere near my children. I certainly would not want to pay $15k for the privilege of having my children sit in his classroom where he might spout who knows what ugliness! To use a Jewish expression, "Feh!"


But Chikindas is just one of Rutgers Jew-hating academics. There's also Jasbir Puar, an associate professor of women’s and gender studies at Rutgers. Puar has accused Israel of genocide; of mining organs for scientific research; and has called for "armed resistance," which, of course, is code for "kill the Jews." Puar also said we Jews use the Holocaust to "hijack the discourse" of "Palestinian trauma."

There's a third poisoner of young minds at Rutgers, and that is Mazen Adi, who, for the paltry sum of $15K or so, will lecture your children on international criminal law and anti-corruption. Perfect, coming from a guy who represented the Bashar Assad regime in the UN. While he was at the UN, Adi said that Israel targeted civilians, trafficked in children's organs, and buried enemy soldiers alive. He called Syria, on the other hand, a "trailblazer" in the fight against terrorism, and told everyone how Assad was committed to a peaceful resolution to the conflict (like chemical attacks on civilians??). Adi is said to have spoken of Arab terror in class, calling it a legitimate form of "resistance" (more code for "kill the Jews") to Israeli "occupation."

Israellycool exposed Chikindas, and Algemeiner then reported the story. That made people aware of what is going on at Rutgers, helped amplify this horrible thing: that these three dishonest, nay EVIL, people who lust for Jewish blood have reached the highest level of academia and are teaching your children (for which parents, many of them Jewish, are paying a fortune). Perhaps as a result of this bit of media "noise," a town hall meeting was facilitated by the Rutgers student government. The students were addressed by the president of Rutgers, Robert Barchi.

And what did Barchi do? He denigrated Algemeiner, which wasn't even the original source of the story (that would be Israellycool). He lectured the frightened, offended, angry Jewish students on free speech. Something that just would not have happened had the professors in question disparaged black people, for instance, or gays.

Had that been the case, there would have been no conversation about free speech. Indeed, Chikindas, Puar, and Adi would be gone, kaput, past tense. There would be hashtags to tweet, the students offered safe spaces.

But there are no safe spaces for Jews.

At least not at Rutgers, where the largest concentration of American Jews pay through the nose, for "higher" education.


We have lots of ideas, but we need more resources to be even more effective. Please donate today to help get the message out and to help defend Israel.
Varda Meyers Epstein (Judean Rose) at Wednesday, November 22, 2017
‹
›
Home
View web version