Palestinian Media falsely presents Holocaust images as images from the Israeli/Palestinian conflict. My research has revealed dozens of cases in which Palestinian and Arab publications, including mainstream newspapers, are publishing images of World War 2 Nazi concentration camps falsely labeling them as events that occurred in the Middle East conflict.

Sure enough, this image from the Gestapo concentration camp  Mittelbau-Dora has been used in Arabic media as proof of Israeli massacres. The camp was not primarily meant for Jews although thousands of Jews, including women and children, were sent there towards the end of the war and many died en route and starved to death in the camp itself. 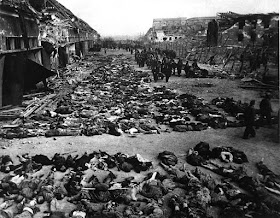 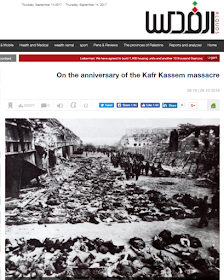 Qudsn.ps says that the photo was of Tel Zaatar in Lebanon from 1976.

Karama Press, the Shasha.ps news site and many other sites identify this photo with Deir Yassin (autotranslated screenshot): 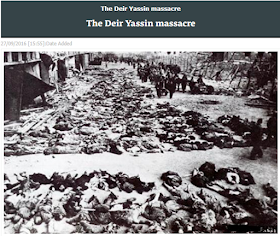 Al Ghad TV says it is a photo of Sabra and Shatila in Lebanon:

The already disgusting Holocaust inversion done routinely by Palestinian Arabs and their antisemitic defenders (where Jews are accused of being just as bad as Nazis) becomes even more grotesque here, as these images are meant to erase the Holocaust altogether and replace it with Palestinians as the victims.

UPDATE: Our very own Petra Marquardt-Bigman noticed this last year, and she quoted me for noticing it in a slightly different context in 2013!

Welcome to all the new visitors to the site! Check out the many other things you'll see nowhere else!

We have lots of ideas, but we need more resources to be even more effective. Please donate today to help get the message out and to help defend Israel.
Elder of Ziyon at Thursday, September 14, 2017
‹
›
Home
View web version