Only in Israel: A Moment in the Supermarket (Judean Rose) 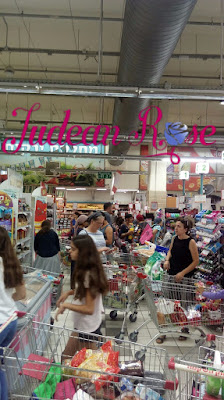 Maybe you've heard of the phenomenon known as "only in Israel." It may seem self-explanatory: something that could only happen in Israel, which is true. But it's more than that. It's a flavor, a culture. You only know it's happened when it hits you, and you wouldn't know what you were seeing unless you'd spent some time in Israel, living among Israelis.

"Only in Israel" is so well known a phrase that people often abbreviate it, especially on social media. "OIL," they'll comment, which is ironic, considering that nope: oil was not one of the things God gave Israel. At least not that we're aware, up until now.

The "Only in Israel" moment comes to remind you why you love the land, why you chose to live in Israel instead of your birthplace, in spite of the heat, the terror, and living so far away from family you may have left behind. It comes just when you need it, the "Only in Israel" moment, when you're heart-sore and tense and worried. It's a kind of magic or medicine that completely changes your perspective, without effort, in milliseconds.

As you know, we usher in Rosh Hashana, the Jewish New Year, Wednesday night. Since Rosh Hashana, a two-day holiday, is this year followed by Shabbat, we have to prepare for what is, in essence, a three-day holiday. If one is not lucky enough to get invited out for the holiday, the week has been a maelstrom of earnest shopping and cooking the likes of which is difficult to describe.

You worry about how far in advance you can cook chicken, and whether that kugel can be frozen. You worry about buying lettuce, because if you buy it early it will spoil and if you wait too long, there won't be any left. You worry about not having enough air circulating in your fridge because it's so jam-packed, that the lettuce you managed to find might actually freeze, rendering it inedible. You worry about waking up on Shabbos morning and oh no, that chicken you cooked on Wednesday doesn't smell very good.  Most of all, you worry about paying for it all. And if you work for a living, you're hard pressed to get it all done: work, shop, cook, work, shop, and cook some more.

It's a recipe for some serious tension.

Sunday morning, my husband took my second Rosh Hashana shopping list (I made five, broken down by days and tasks) and failed to come home with ginger root, marzipan, and marmalade. I accused him of being vision-challenged, and he dared me to come with him right there and then to find those things in the store. Huffing and puffing, I slipped on my shoes and jumped into the car with him. Sure enough, I found ginger root, marzipan, and marmalade, no problem. That may have been because it was a different store. Or it may be that my husband is, um, vision-challenged.

At any rate, I brought my loot to the checkout line and it was LONG. The cashier was yelling at a woman, saying, "You can't do that when it's busy like this. You can't just make everyone wait and let the line pile up while you go and look for something when I'm already checking out your items!"

'Oh, great,' I thought. 'This is just lovely. Waiting to buy three items with a gazillion people in front of me, a selfish customer, and a testy cashier.'

I was watching the people in front of me to see how long it would take and I realized both of them were friends with me on Facebook, and neither of them knew me by sight. 'Depressing,' I thought. And sighed.


The cashier looked at  me agog. Everyone in the store stopped and stared. The guy in front of me whipped around, confused. "Who's whistling??" he said.

The cashier said, "It was a duet!"

Everyone was, by now, smiling and laughing, the tension completely defused. The cashier from the first line, getting in on the fun said, "Everyone knows that song!

It was an "Only in Israel" moment.

Shana Tova to all my readers! A sweet year.

We have lots of ideas, but we need more resources to be even more effective. Please donate today to help get the message out and to help defend Israel.
Varda Meyers Epstein (Judean Rose) at Tuesday, September 19, 2017
‹
›
Home
View web version