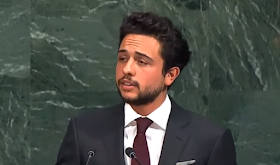 My country--a resource-poor nation in a conflict-rich region--is host to 1.3 million Syrian refugees. Add to that millions of Palestinian refugees and hundreds of thousands of Iraqis, as well as others from Libya and Yemen: Jordan, today, is one of the largest hosts of refugees in the world.

Isn't it curious that Jordan considers over 2 million of its own citizens - people who have been citizens of Jordan for nearly 70 years - to still be "refugees" that are a burden on its resources like Syrian and Iraqi refugees are?

This has not been the only casual disparagement of Palestinians by Jordan's royal family this year. In an interview with the Washington Post in May, Jordan's King Abdullah mentioned a startling statistic:


In 2016, for the first time, we captured and killed 40 ISIS terrorists in two major incidents. Ninety-six percent of them were of Palestinian origin.

The math doesn't add up - 38 would be 95% and 39 would be 97.5% - but Abdullah was backhandedly saying that Palestinians are more likely to become ISIS terrorists - but the fact that Abdullah associated Palestinians with terrorism caused Jordanian media to censor their own king's comments to remove the words "terrorist" and "96%." (Abdullah was falsely blaming the high percentage of Palestinian recruits to ISIS on the "Israeli-Palestinian" conflict, which is absurd on the face of it because ISIS is killing Muslims.)


We have lots of ideas, but we need more resources to be even more effective. Please donate today to help get the message out and to help defend Israel.
Elder of Ziyon at Sunday, September 24, 2017
‹
›
Home
View web version