A textbook case of media bias that most people would miss


Over 50 Christian and Muslim sites have been vandalized in Israel and the West Bank since 2009, but only nine indictments have been filed and only seven convictions handed down, according to Public Security Ministry data. Moreover, only eight of the 53 cases are still under investigation, with the other 45 all closed.


Because of this story, Haaretz wrote a lead editorial with the title "Israel's Public Security Minister Is Soft on Crimes Against Christian and Muslim Sites."

At no time does Haaretz investigate how many times arson of Jewish sites results in indictments or convictions.

Haaretz is trying to say that Israeli police do not prioritize hate crimes against Muslims and Christians, but the implication is that this is not the case for Jews.

Haaretz is also trying to say that the 53 incidents over 8 years is a huge number, but it doesn't give a comparable accounting of how many anti-Jewish incidents there were.

I don't know the answer. Perhaps there is bias. Certainly more resources could be used to find the criminals. But without knowing how many Jewish sites were attacked and how many attackers were caught, this story is innuendo - not news. 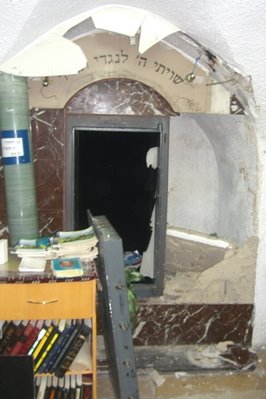 In 2007, I visited the burial place of Samuel the Prophet - right after it was vandalized by Arabs. Torahs were desecrated, books destroyed, the Ark badly damaged. The story was barely reported in Arutz-7 and ignored by all other Israeli English language media. Haaretz certainly didn't report it. The people at the site  described it to me as a "pogrom" and told me this wasn't the only time it happened.

Were the vandals caught? I have no idea. But I doubt it.

There are plenty of arson and vandalism attacks against Jewish sites in Israel, from the desecration of graves on the Mount of Olives by Arabs to attacks by bored teens to attacks by atheists against synagogues and intra-Jewish attacks as well.  I don't know how many are done by Arabs and how many by Jews. I don't know how many were only graffiti and how many were actual damage to holy objects on either side.

But this is what is needed to know exactly how bad the problem is.

A real newspaper would compile all these statistics. A newspaper with an anti-Jewish bias, however, would do exactly what Haaretz did. 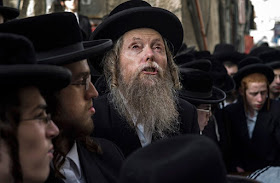 (Not surprisingly, Arab media is republishing the Haaretz report as gleeful proof that Jews are constantly attacking Muslim holy sites - using this photo as representative of "Jews."While any attack is too many, 53 attacks over 8 years is about one every two months, which is hardly an epidemic.)


We have lots of ideas, but we need more resources to be even more effective. Please donate today to help get the message out and to help defend Israel.
Elder of Ziyon at Tuesday, September 26, 2017
‹
›
Home
View web version