On Sunday (24/4/17), the Jerusalem Municipality deposited for public review a special plan (no. 470484) for the confiscation of 1,300 square meters in the Jewish cemetery in the Mount of Olives, adjacent to the Ras El-Amud mosque. The plan, initiated by the Jerusalem Development Authority (JDA), is meant to allow the confiscation of parcel no. 10 in bloc no. 29991 for public use, in order to allow the construction of a visitor center. The area of the plan is a highly sensitive one, located at the heart of the historical basin of Jerusalem, 300 meters from the Old City and the Temple Mount/Al-Haram A-Sharif, and next to the mosque of the Ras El-Amud neighborhood.

Dragged by settler organizations, the Israeli government is willing to go out of its way to approve this sensitive plan through a highly unusual procedure. In the current political context, to establish a visitor center next to a mosque and 300 meters away from Temple Mount/Al-Haram A-Sharif is to play with fire. A visitor center in this sensitive area could have far reaching implications on the future of the two state solution and the possibility for a compromise in Jerusalem.

Peace Now admits that the site is inside the area of the ancient cemetery. No Arab land is being taken.

It shows a picture of the area, on the southwest side of the cemetery. 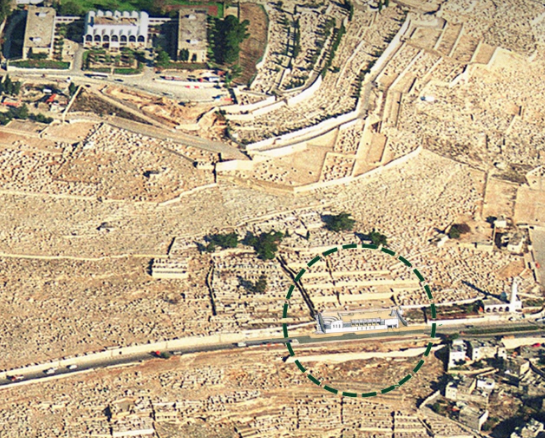 In an effort to anticipate Muslim rage, Peace Now helpfully says that it is next to a mosque and 300 meters (three football fields) from the Temple Mount, which makes it "sensitive" - by this definition, along with a good chunk of Jerusalem.

The idea of Israel building a visitor center in the site of the most important Jewish graveyard in the world, not to mention a hugely important Christian site, is simply anathema to Peace Now, who believes that Jews have no rights to their ancient capital and the thousands of Jewish graves should be under Muslim control, just as they were from 1949-1967, when Jordan used gravestones for walls of latrines and road construction.

When you look at the area of the planned visitor center in Google Street view, you see exactly why it is needed - the narrow road is clogged with tourist buses.


Moreover, a visitor center in that area would help protect the graves from being desecrated by Muslims, as they are often being today. It would also provide a safer way for Jews to visit the site, which is often dangerous today.

If the unthinkable happens and Israel gives up this hugely important historic Jewish area, the visitor center would remain to be used by the new administrators, so building it doesn't affect the prospects of peace one bit anyway!

But Peace Now doesn't care about safety, or convenience, or Jewish heritage or ancient Jewish graves. It mentions how sensitive this site is to Muslims - when it is not - and doesn't bother to mention the benefits of continuing to develop Jerusalem for everyone.

In short, by Peace Now mentioning how "close" this is to the "Haram A-Sharif" it shows that the supposedly Jewish organization is trying to stir up Muslim anger at Israel, not to minimize it. It also shows how little this "human rights' organization cares about the rights of any humans who are not Arab.

This is, as Professor Richard Landes likes to say, proleptic dhimmitude.

We have lots of ideas, but we need more resources to be even more effective. Please donate today to help get the message out and to help defend Israel.
Elder of Ziyon at Wednesday, April 26, 2017
‹
›
Home
View web version