ICRC emphatically says no extrajudicial killings, no apartheid in Israel 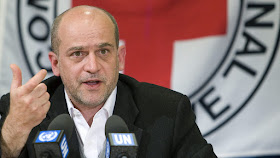 It is sad that the obvious becomes news.

YNet interviewed Jacques De Maio, the head of the International Committee of the Red Cross delegation to Israel and the Palestinian Authority.


Israel gives us—unlike the security establishments in many other countries, including Western ones—quick access to senior officials in the IDF, the Prison Service, and other security services. We have useful, productive and professional dialogue with them. We clarified with them the issue of shooting assailants who carry out terror attacks and we reached an unequivocal conclusion that there is no IDF order to shoot suspects to kill, as political officials tried to convince us. The rules of engagement haven't changed, and have actually been made stricter. It is true that individual soldiers have made the wrong decision at times and that there are many instances of outrageous behavior at border crossings—at times in complete violation of orders. We do not hesitate to report that to the IDF and we usually get a professional response. That is why we rejected the accusation, and there were immediately those who claimed we were covering up war crimes committed by the IDF, and that we were serving the Zionists.

The Red Cress was very familiar with the regime in South Africa during Apartheid, and we respond to anyone who makes the argument that Israel is an apartheid state: No, there is no apartheid here. There isn't a regime here that is based on the superiority of one race over another; there is no disenfranchisement of basic human rights based on so-called racial inferiority. What does exist here is a bloody national conflict, the most prominent and tragic feature being that it is decades long, and there is occupation. Not apartheid.

De Maio plays a little fast and loose with this part of the interview:


The most complicated thing is to maintain the Red Cross's fundamental principle: neutrality, not taking a position in a situation where each side believes its position is the most moral and just and demands us, the Red Cross, to affiliate ourselves to it and condemn the other. I am constantly asked how we could treat both the aggressors and those who are defending themselves—terrorists and those who fight against terrorism—with the same level of leniency. And I answer: We offer help to people as human beings who need our help. Almost all of our work is done quietly, without publicity, often in secrecy, and our only goal is to protect people's natural rights. Not to deal with politics. Battling politics and political manipulation takes too much time and resources from us.

Unfortunately, the ICRC's position that Gaza is still legally occupied is nonsensical and the only reason they hold that position is political.

We have lots of ideas, but we need more resources to be even more effective. Please donate today to help get the message out and to help defend Israel.
Elder of Ziyon at Wednesday, April 26, 2017
‹
›
Home
View web version