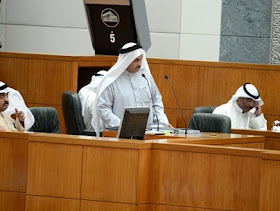 Last month, I reported that Kuwait was seeking to expel Israel from the International Parliamentary Union.

But they can't just kick out Israel, That  doesn't look good. They need to use the existing bylaws of the IPU in order to get rid of Israel. And if the existing laws aren't adequate, they need to add new ones.

So they have put together an elaborate plan over the next couple of years - all with the goal of getting rid of Israel - within the rules.

It is instructive to see them lay out their plans now, because this is how the anti-Israel forces work. They use moral reasons to justify their antisemitism, but as in this case, they know they hate Israel/Jews before they come up with the bogus reasons why they hate them. The IPU has no bylaws to kick out Israel, so the Arabs must create them.

In this case, they are very public about their plans.

Kuwaiti National Assembly Speaker, Marzouq Al-Ghanim said in a speech to the Arab Parliamentary Union conference on Tuesday, that the goal was to remove the Israeli Knesset from the Union.

He told reporters on the sidelines of the conference in Rabat that the Kuwaiti Parliamentary Group is going to propose amendments to the Statute of the Inter-Parliamentary Union to allow the creation of penalties for violation of what they will call "fundamental principles" that are aimed directly at Israel.

In this case, Kuwait will try to propose that any country that ignores certain UN resolutions be expelled. He specifically cited UN Security Council Resolution 2334 that passed late last year and Israel's law that could legalize specific settlements after the fact.

The anti-Israel  amendments will be presented to an  Executive Committee meeting to be held in Dhaka in April. The proposed amendments will then be placed on the agenda of the Governing Council in St. Petersburg in Russia next October.

But Al Ghanim was careful to tell reporters that all of these moves to expel the only Jewish state was not being done out of racist motives, but because Israel's transgressions are so "flagrant and obvious."

He stressed that "the duty of every Arab member of the group (and not just the Kuwaiti parliament) is to win for the cause of the Arabs and Muslims and all of the free world, which is the Palestinian issue."

We have lots of ideas, but we need more resources to be even more effective. Please donate today to help get the message out and to help defend Israel.
Elder of Ziyon at Thursday, March 23, 2017
‹
›
Home
View web version