Maybe I’m wrong, but when I read Rami Khouri’s recent article on an Arab Center poll that, according to him, “shows Arab realities, as opposed to US mythologies,” I couldn’t help sensing that Khouri was quite pleased with one particular result of the poll. As he put it in his column:

“It was fascinating to see that while the U.S government and Israel are seeking a mythological alliance of Arabs and Israel against Iran, the survey found that the overwhelming majority of Arabs (86 percent) reject official recognition of Israel by their governments. This reflected widespread perceptions of Israel’s colonialist policies towards the Palestinians and its expansionist threat to other Arab countries. Dr. Mohammad Almasri, Coordinator of the Arab Opinion Index, explained this Arab animosity towards Israel as reflecting political actions, rather than being framed in cultural or religious terms.”

Right: “Arab animosity towards Israel” is of course due to Israel’s evil “political actions,” and Arab Jew-hatred has nothing whatsoever to do with it. And Professor Rami Khouri – a “Palestinian-Jordanian and U.S. citizen” who is “director of the Issam Fares Institute for Public Policy and International Affairs at the American University of Beirut,” and who also held various academic positions in the US and is a Senior Fellow at the Harvard Kennedy School’s Belfer Center – seems quite happy that his fellow Arabs oppose any official recognition of Israel because of its “colonialist policies towards the Palestinians and its expansionist threat to other Arab countries.”

But in the real world, there is something much sadder, as I outlined in a recent post on “The depth of Arab misery” – which has nothing whatsoever to do with Israel. Instead, according to the latest UN Arab Human Development Report, the dire situation and the grim prospects for the future of Arab countries are due to the misrule of autocratic governments and to factors like “high levels of social and religious intolerance” and the related disempowerment of women. The severe form of Israel Derangement Syndrome from which the vast majority of Arabs suffer is simply a symptom of a broader refusal to move into the 21st century.

But according to Khouri, “the U.S. and other Western lands … still largely deal with an imagined, rather than the actual, Arab world” – yet arguably, the problem here seems to be that “the U.S. and other Western lands” underestimate how much Arabs believe in the imaginary evil of Israel or, for that matter, the US: as the poll shows, 89% of Arabs believe Israel poses “a threat to the stability of the Arab region” and 82% also see the US as posing such a threat. Iran, which has been busy stoking murderous sectarian violence in the region for years, was seen as a threat by 73% -- which does show that despite the intense Arab hatred for Israel and the US, a bit of reality sometimes manages to assert itself. 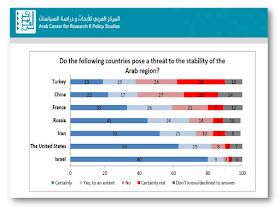 On the other hand, it is a telling coincidence that, while 89% of Arabs believe that Israel poses “a threat to the stability of the Arab region,” 89% also have a “negative” view of the brutal terror organization Islamic State (ISIS/ISIL). Consider these findings in light of the various available (usually partial) lists of ISIS atrocities (e.g. here); a good perspective can also be gained by reading e.g. this UN report from 2014 on the toll of the just beginning fight against ISIS in Iraq:

“Overall, at least 24,015 civilians have been killed or injured in Iraq during the first eight months of 2014. […] The actual numbers could be much higher. Additionally, the number of civilians who have died from the secondary effects of violence, such as lack of access to basic food, water or medicine, after fleeing their homes or who remained trapped in areas under ISIL control or in areas of conflict  are unknown. […] As of August 2014, an estimated 1.8 million Iraqis had been displaced due to the ongoing violence.”

That is the toll for just part of 2014, and just in Iraq, where most of the victims are Arabs – yet, Arabs think Israel is about as bad as ISIS. Moreover, as Khouri himself admits: “it is also worrying that 5 percent, or 20 million Arabs, had positive views of it [ISIS].”

I agree with him on this one: it is really worrying that about 20 million Arabs approve of a savage terrorist group like ISIS.

And, to put this into perspective: if some 20 million Arabs have “positive views” of ISIS, there are about three times more Arab ISIS fans than there are Jews in Israel.


We have lots of ideas, but we need more resources to be even more effective. Please donate today to help get the message out and to help defend Israel.
Elder of Ziyon at Monday, March 20, 2017
‹
›
Home
View web version