Abbas again threatens the world with terror - and blames Israel 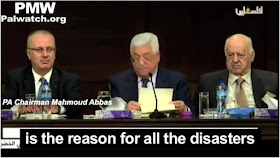 Why should Mahmoud Abbas change the narrative when there are so many people who are eager to believe it?


The international community is becoming more and more convinced that the occupation of the Palestinian state by Israel is the reason for all the disasters that the region and the world are suffering from, and that without a just solution to the Palestinian issue in accordance with the two-state solution – which is included in the Arab Peace Initiative – and the relevant resolutions of the [UN] Security Council, neither peace, nor security, nor stability will be achieved, and the region will remain exposed to very difficult possibilities, especially in light of the growth of the phenomenon of terror and extremism, which we condemn and are fighting against with all of our strength.

Blaming Israel for ISIS and Syria and Libya and Yemen and Iran is just a more sophisticated form of antisemitism.

The "linkage" argument gets more absurd by the day, and yet Abbas needs it in order to justify his assault on the Jewish state.

But in reality, as always, Abbas is giving the world a threat: as long as he doesn't get his demands met, he is promising more terror and bloodshed.

This is officially-sanctioned blackmail.

We have lots of ideas, but we need more resources to be even more effective. Please donate today to help get the message out and to help defend Israel.
Elder of Ziyon at Wednesday, March 22, 2017
‹
›
Home
View web version