The historic Ohel Yitzchak synagogue - in the Muslim quarter

Last month I had the chance to briefly visit the Ohel Yitzchak synagogue which is immediately to the north of the Western Wall, outside the northern security gate.

The story behind the synagogue is very interesting. it is, in many way, the story of Jews in Jerusalem since the 19th century. 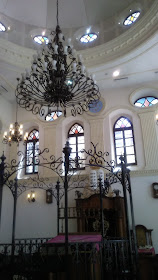 The building is an exact replica of the original synagogue which was first built in 1904 by the community of Shomrei HaChomot (Guardians of the Walls) that originated in Hungary. The building suffered many hardships, was abandoned during the 1936-1939 pogroms, and was destroyed during the War of Independence in 1948 as part of the methodic destruction of most synagogues in the Old City by the Jordanian army. It was rebuilt in 2008 by the Western Wall Heritage Foundation and is currently used for prayers both on weekdays and holy days.

The wave of Jewish settlement in the 19th century brought about an expansion of population enclaves outside the walls of the Jewish Quarter, when early settlers purchased lands, mainly in the Muslim Quarter of today, and set up courtyards for their communities. One of the areas in highest demand was the Hebron Quarter, a section close to the Western Wall and the Temple Mount, which in its heyday housed 5,000 Jews from various communities.

With this happening, the Shomrei HaChomot community purchased a large courtyard at the edge of the Quarter in 1867. ...

The construction of the Ohel Yitzhak synagogue is finally completed in 1904. It is one of the most magnificent synagogues in the Old City....It has been told that no roof and dome were constructed on the synagogue, as was common in that period, for fear that the Muslims would feel that the synagogue’s roof was higher than the Dome of the Rock and destroy it. So, they built a simple tiled roof on the Ohel Yitzhak building.

During the 1921 pogroms the students at the Or Hameir Beit Midrash were forced to vacate the premises and move to Batei Ungarin in the nearby Meah She’arim neighborhood, outside the Old City walls. They returned several years later, but had to leave once again during the 1936-1939 pogroms, this time forever. The apartments were rented out to Arabs who lived in the building until 1948, when the synagogue was destroyed during the War of Independence by the Jordanian army, together with all the other magnificent synagogues in the Old City.

With the liberation of the Old City during the Six Day War, ownership of the Ohel Yitzhak Synagogue was once again given to the Hungarian community. The building was in total ruins but the community did not have sufficient funds to conduct renovation work. A book store, Rishon L’Zion HaAtika, the first Jewish-owned store in the Old City since the War of Independence, was opened on the ground floor.

In 2008 restoration of the synagogue was completed, precisely reflecting the synagogue that was destroyed in 1948, and one can even see the north-eastern corner of the original building. Only the roof of the building is different and has been constructed according to the original plan, with a dome on its roof.

Note that there were thousands of Jews, and many synagogues, in the "Muslim Quarter" before 1948.

Also note that while Muslims claim that they aren't antisemitic because they lived together with Jews before 1948, they are very upset over the idea of living with Jews in Jerusalem in the 21st century, even when Jews are only rebuilding the exact same structures they had before they were burned down. Which makes one question exactly how tolerant they really were before 1948. (The 1921, 1929 and 1936 pogroms pretty much answers that question.)

We have lots of ideas, but we need more resources to be even more effective. Please donate today to help get the message out and to help defend Israel.
Elder of Ziyon at Monday, August 29, 2016
‹
›
Home
View web version