Terrorist who tried to poison Israelis at cafe released, greeted as hero 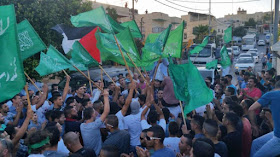 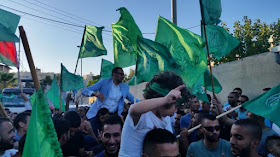 He was greeted as a hero by scores of cheering Palestinian Arabs.

What was his crime that they are so happy about?

He was convicted of attempting to poison Israelis at a Cafe Rimon in Jerusalem. Working with an Arab cook there, the plan was to insert a poison that would not take effect for many hours after diners ingested it for maximum deaths.

Luckily, the plotters were caught before they could implement the plan. But that failure to murder Jews seems to have been enough to set him free now, even though there is no difference between how he acted in his attempt to murder Jews and how he would have acted had it been successful.

The Shin Bet said that his bid to kill Jews was to avenge the death of Hamas activist Salah Shehadeh.

Abdo's friends and family in the Jabel Mukaber neighborhood in Jerusalem placed him on their shoulders and cheered his release.

The first thing he did was to visit the Al Aqsa Mosque and to pray there.

Because terrorists have more rights on Judaism's holiest site than Jews do.

We have lots of ideas, but we need more resources to be even more effective. Please donate today to help get the message out and to help defend Israel.
Elder of Ziyon at Tuesday, August 16, 2016
‹
›
Home
View web version