Not newsworthy: 4 killed in clashes between Palestinian security and suspects 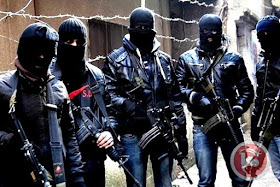 Israel gets blamed for any force it uses in searching for terrorists, but here's something that you won't hear about often:

A Palestinian security official told Ma'an early Friday that two of the armed men were killed in the Old City of Nablus overnight during armed clashes as security forces attempted to arrest them. The two were initially reported as injured, and were taken to a hospital in Nablus city where they were pronounced dead.

The official added that three M16 guns were found with the armed assailants who were killed.

The spokesperson for the Palestinian security forces Adnan Dmeiri confirmed Thursday that security forces were searching communities and trying to find and capture those responsible for killing the officers, adding that the security forces would continue to carry out arrests and raids on Palestinians engaged in illegal activities.

According to Dmeiri, five security officers have been killed in the past month.

This is  the type of story that the Western media shies away from. The main reason is because Israel isn't involved, but also because it highlights the fact that the IDF is quite justified in its rules of engagement when trying to arrest terrorists. Even Palestinian security has the same issues in their daily work, and five of them were killed in the past month!

We have lots of ideas, but we need more resources to be even more effective. Please donate today to help get the message out and to help defend Israel.
Elder of Ziyon at Friday, August 19, 2016
‹
›
Home
View web version