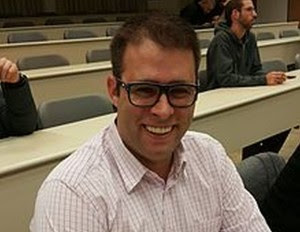 Jerusalem, June 22 - Likud lawmaker Oren Hazan courted controversy again today when he described the female members of the Knesset Committee on the Status of Women and Gender Equality as unattractive.

Hazan, who has a reputation for crudity, made the remarks following a Likud faction meeting. Several women legislators heard the statement, and said they intend to submit an ethics complaint.

"Those girls could learn a thing or two from Ayelet Shaked and Stav Shaffir," Hazan was heard to say. "Who is going to take these women seriously if they don't take their own looks seriously? I'm sorry, but I don't think the public wants to entrust its assets and its future to a group of hypocrites who pretend to care about the status of women but don't think the rules apply to them."

While the legislator spoke to no one in particular, assorted members of the Knesset clerical staff stared, transfixed, as Hazan held forth on the aesthetics of the women on the committee. Taking that as an invitation to continue, he gave a woman-by-woman breakdown of his opinion on the appearance of each female member of the committee.

"[Yesh Atid MK, Committee Chairwoman Aliza] Lavie, you could tell was attractive when she was younger, but she's already in her fifties, so forget it," he asserted. "I think it says something about the committee that they didn't choose the prettiest girl in the room, or even anyone in the top five. It's disgraceful, come to think of it."

"Then there's [Kulanu MK Merav] Ben-Ari, who might have had a half a chance a decade ago, but she's still single, at age forty-one," he continued. "That's just pathetic. And there's [MK Shuli Moalem]-Refaeli, who might have been kinda cute once upon a time, but she dresses all religious and has had seven kids, which takes a toll on a girl's looks. Dressing all modest-like doesn't undo stretch marks. You just have to be honest about that."

Hazan saved his most damning critique for last, lashing out at Joint Arab List MK Aida Touma-Sliman. "But Aida is the icing on the cake here," he added with rising tones. "Talk about ugly. The fact that she's widowed only strengthens the question for me of how anyone could have found her attractive, but there are freaks in every group, I guess. You'd think that someone with her relatively high economic status would have the brains to use that money for cosmetic surgery, or at least some diet and exercise plan."

The tirade ended when a young female parliamentarian passed by and Hazan went silent, looking her up and down approvingly.

We have lots of ideas, but we need more resources to be even more effective. Please donate today to help get the message out and to help defend Israel.
Elder of Ziyon at Wednesday, June 22, 2016
‹
›
Home
View web version