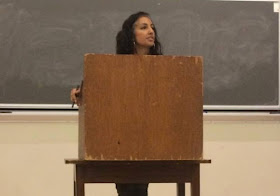 There have been some articles lately about charges of antisemitism against Rutgers University professor Jasbir Puar. I don't like to toss around phrases like that lightly, so I was very interested in reading a transcript of Puar's recent talk at Dartmouth University.

Is she a classic antisemite? No. But her rhetoric shows why the argument that anti-Zionism is  a modern form of antisemitism has a lot of merit.

First of all, Puar was participating in a panel discussion of gender and ecological issues - yet she spoke only about Israel and supposed Palestinian oppression. She barely even tried to relate her talk to the topic. Such obsession, and indeed rudeness to the organizers of an event on a completely different topic, betrays a hatred that goes way beyond sober academic reflection.

Secondly, her comments itself were the usual pseudo-academic rhetoric that one often hears from obsessed Israel haters. It starts from the premise that Israel is uniquely evil in the world, and all of her "research" is based on that flawed assumption.

The paper is in three parts, so the first part is about the new project. The second part is a kind of piecing of an article that’s already been published in order to set the stage for the third piece, which is part of the second half of the book. And I apologize to those of you who have probably already heard one part or another in some other context but this is how I wanted to lay it out to you today.

So the first part is called Inhumanist Biopolitics: How Palestine Matters. How Palestine Matters apprehends the science fiction of the everyday, of every day life. It stretches the speculative into the now, to revise the temporal frames of past, present and future. The West Bank is the past of Jim Crow and the future of controlled societies together. While many decry the settler colonial project of Israel as an archaic remnant of the past, bemoaning, how can this still be happening in the 21st century, I would argue that it is only in the 21st century that such a concentration of power, economy, and technology is possible.

In this project I attempt to articulate what I am calling the computational sovereignty of Israeli settler colonialism: occupation and apartheid. This twerking of sovereignties stands as a challenge to the literatures of biopolitics, deploying a notion of population beyond the human, non-human, animal frame. How do objects compose a population? How do toxicities populate and become populations?

In centering in human entities and temporalities how Palestine matters resituates the geopolitical that has been oddly alighted in the resurrection of the ecological and the geographical and emergent fields of new materialisms and Anthropocene studies. Many scholars have rapidly noted that much of the Anthropocene talk has been enabled through a rather bald-faced appropriation of long-standing native and indigenous cosmologies. So the book attempts to offer a counter genealogy to the surge of theories of object-oriented ontology and theories of post-humanism by putting them into direct relation to the fields of post-colonial theory, questions of imperial occupation and settler colonialism and disability studies.

Did you get that? Neither did anyone else. It is nonsense, although this may be the first time I've seen the word "twerking" in a so-called academic setting.  But it goes beyond nonsense - it is an attempt to build an edifice of quasi-academic lingo on a foundation that is a lie to begin with. Israel's unrivaled and malicious evil is a given, and it is up to academic frauds like Puar to find new and innovative ways to express their hate in socially acceptable ways, which includes gobbledygook.

Much of her talk is based on the premise that Israel has an intentional policy to maim Palestinians. In other words, when an Israeli soldier shoots a rock-throwing protester - who is endangering his life - in the legs, that is an evil Zionist policy to create as many disabled Palestinians as possible. (The idea that this also saves numerous lives compared to other methods of self-defense is completely besides the point, apparently.)

But Puar goes beyond. She came up with a novel theory that every Palestinian is disabled, because they have a lack of mobility, because of Israeli restrictions on allowing Jews to be murdered.

So I want to close with a short comment on recent fieldwork in the West Bank and occupied east Jerusalem that I completed in January 2016. During this visit I met with rehabilitation and disability service providers. I met also with Palestinians with disabilities and spoke with people with varying bodily capacities at numerous checkpoints. Health is big business in the West Bank, and it is among the most dominant form of NGO, humanitarian work conducted by European and North American agencies. It is not news, again, that these otherwise valiant efforts wind up reproducing the dependency of colonized populations while legitimizing the structure of settler-colonial occupation. There’s a tension between the liberal U.N. rights-based frames that these organizations carry forward, one that foregrounds disability as an individual affliction to be accommodated and empowered and understanding Palestinian populations as debilitated, as enduring forms of collective punishment that restrict mobility for everyone albeit unevenly.

If the occupation is reducing able-bodied capacity across manifold Palestinian populations, by literalizing mobility impairment through both targeting the knees and creating infrastructural impediments to deliberately inhibit and prohibit movement, then this disabling is happening on both individual and structural population levels. Neither the medical nor the social models of disability are able to address the complexities of debilitation in Palestine. The medical model understands disability as a defect to be repaired, this repair is usually not possible in Palestine. The social model understands disability, the environment to be disabling, curbs, stairs, elevators, chemicals, but does not address the disabling infrastructure of the occupation, checkpoints, divided highways, settlements that divide Palestinian landscapes and so on. One could say that the disabled are thus twice disabled and yet disability is not held
up as a specific identity formation, but rather understood as one that is evolving. So we wouldn’t say it’s twice disabled, rather that everyone is debilitated to some degree or another way to put it is no one is actually able-bodied. Disability activists are less interested in nor committed to the distinction between the disabled and the non disabled, no one is constituted as necessarily able-bodied, preferring instead to see the inhabitants of the West Bank suffering and resisting together, the collective punishment of the occupation. Does this disabling structure of collective punishment create more acceptance and solidarity between those disabled and those able bodies made disabled by the infrastructure of the occupation? This is one of my pending research questions.

Puar makes up a bizarre relationship between disabled people and Palestinians, and wants to see if Palestinians feel solidarity with the disabled because they supposedly share the same challenges. They don't, of course, but when they see Westerners asking leading questions that can end up demonizing Israel, they know quite well how they are supposed to answer.

The idea that fully abled people are "disabled" because they are under "occupation" is almost certainly highly insulting to people with real disabilities. I think most of them would gladly trade places with the people in the West Bank who have both legs and arms and eyes. In Puar's zeal to foment hatred towards Israelis, she is throwing disabled people under the bus, watering down their very real challenges.

Her last part is the coup de grâce:

Toward the end of our visit with a disabilities support group just north of Hebron, we asked the twenty odd people there what their hopes and dreams were for the future. One after another, the respondents articulated desires for rehabilitation, “I hope to walk again someday,” “I hope to go to Germany so I can get the treatment to fix me.” “I want to be able to know what it’s like to walk.” These statements of desire for mobility are profound in the context of the mobility impairment and in fixing of space that is one of the prime logics of settler-colonial occupation. While the long-standing formulation of disability as deficit drives the right to maim, and the production of widespread debilitation is key to maintaining colonial rule, these desires on the part of Palestinians with disabilities points to something more entrenched, there can be little reclaiming of disability as an empowered identity until and unless the main source of producing debilitation, that is the occupation, is ended. One cannot happen without the other.

She asked a question from rehab patients. They answered the exact same way that rehab patients anywhere in the world would answer the question. But since Puar sees the world through Israel-hating glasses, she sees their answers as damning for Israel for supposedly limiting their ability to heal. (Which is, from everything I can tell, a lie. There are rehab centers in the West Bank.)

The overarching message from Puar, from her choice of topic to her highly selective facts to her outright lies, is that hating Israel is the animating theme of every sociological discipline. Feminism, disability studies, ecology, racism - all of those studies must be anchored in a solid belief of unwavering Israeli evil. Hate is the driver for her entire research discipline.

Since Puar's pretense of research and writings are just a smokescreen to spread hate against Israel and Zionists, it has far more in common with antisemitism than with academics. It might not be antisemitism in the classic sense, but the underlying motivation is just as ugly - and just as devoid of scientific or fact-based evidence.

This was not as noxious as some of her other appearances. Yet they all have one thing in common - hate.

My guess is that social scientists are far more reluctant to openly attack the work of their fellows, because they don't want their own work to be subject to the type of scrutiny that is expected from hard sciences. It would be a much better respected field if sociologists and the like would rip apart academic frauds like Jasbir Puar instead of silently allowing her and those like her to be nothing more than vehicles of hate.

It would be nice to see what a truly disabled person has to say about her theories, though.

We have lots of ideas, but we need more resources to be even more effective. Please donate today to help get the message out and to help defend Israel.
Elder of Ziyon at Sunday, May 15, 2016
‹
›
Home
View web version