"Arab states working with Israel to replace Abbas with Dahlan" 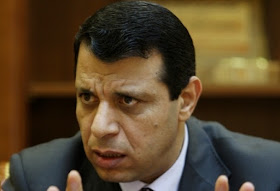 
The United Arab Emirates, Egypt and Jordan are planning for a post-Mahmoud Abbas era that would leave his Fatah archrival Mohammed Dahlan in control of the Palestinian presidency, the Palestinian Liberation Organisation and the Palestinian Authority, Middle East Eye has learned.

Senior Palestinian and Jordanian sources told MEE separately of the plan. Although there were differences in emphasis - the Jordanian source added caveats about Dahlan’s known weaknesses - they independently corroborated the existence of a joint plan of action.

Abbas has been a dominant figure in Palestinian politics since the 1990s and Palestinian president since 2005.

Dahlan is a former leader of the Palestinian political party Fatah who has been exiled from Gaza and the West Bank and has close ties to the UAE monarchy.

The UAE has already held talks with Israel about the strategy to install Dahlan, and the three parties will inform Saudi Arabia once they reach an agreement on its final shape.

The key objectives of the plan are to:

• unite and bolster Fatah for the forthcoming elections with Hamas
• weaken Hamas by dividing it into competing factions
• conclude a peace agreement with Israel with the backing of Arab states
• seize control of sovereign Palestinian institutions, the Palestinian National Authority (PNA), the PLO chairmanship and leadership of Fatah
• choreograph the return of Dahlan as the power behind the throne of Fatah and the Palestinian Authority (PA)

One of the prime movers of the plan is Mohammed bin Zayed, the crown prince of Abu Dhabi, who made clear to Jordan that differences over Palestinian President Abbas affected bilateral relations.

At one point, the Emiratis demanded the arrest of Abbas as well as a ban on him entering Jordan or using Jordan to travel abroad.

“The Emiratis, particularly Mohammed Bin Zayed, absolutely reject Abbas on the personal level, to the extent that they told the Jordanians explicitly that the reason the UAE is negative about Jordan is due to the fact that Jordan did not take a stand against Abbas,” a senior Palestinian source told MEE.

The three Arab countries have enumerated the steps needed to implement this plan and have allotted roles for each actor to play.

This is a fairly long and elaborate article, and it is intriguing, although I would take it with a large grain of salt.

There is no doubt that Dahlan is a wily politician who has a fair following, but since he was exiled his influence has waned. He is also a thug who has not hesitated to use violence against his political enemies when he was in charge of security in Gaza.

It does mention obstacles to Dahlan's triumphant return:


He is considered to be unpopular among Palestinians and is accused of corruption and links to the Israeli security services.

His “zero sum” relationship with Abbas, who sees Dahlan as the main threat to his presidency, is also considered problematic, as is the fact that he works outside of the territory controlled by the PA.

The Jordanians believe the decision by Abbas to replace Yasser Abd Rabbuh as secretary to the PLO executive with Saeb Erekat shows Abbas is aware of the potential for a palace coup, and could work against Jordanian interests in Jerusalem.

It was, however, noted that Dahlan had influence in the Palestinian refugee camps inside Jordan and could constitute “an important card to impose control inside the camps”.

Weighing up the various pros and cons of Dahlan’s offer, Jordan opted to stall, according to the source.

The policy was to continue to enhance contacts with Dahlan and to show interest in embracing Fatah’s reconciliation, but to tell him to wait until after the US presidential elections and to ask for US help in pushing Abbas towards a reconciliation.

I have no idea if Israel supports Dahlan, and it seems like a long shot. Positioning him as an alternative to Hamas when Abbas dies may make a little sense; Hamas leaders are more charismatic than Abbas' heir apparent Saeb Erekat.

The article is detailed enough to make it seem at least a little plausible that such a plan is being hatched, although the chances of it actually being implemented seems very low.

We have lots of ideas, but we need more resources to be even more effective. Please donate today to help get the message out and to help defend Israel.
Elder of Ziyon at Sunday, May 29, 2016
‹
›
Home
View web version