Under the patronage of Custodian of the Two Holy Mosques King Salman, Minister of Culture and Information Adel Al-Toraifi inaugurated Riyadh International Book Fair 2016 on Wednesday.

A large audience attended the opening ceremony at the Riyadh Center for Exhibition and Conference, including top Ministry of Culture and Information officials, diplomats and representatives of local and international publishing houses along with the general public.

Around 500 local and international publishers and countries are participating in the fair, displaying a wide variety of books on science, technology, history, literature, politics, religion, languages, geography, medicine, engineering and education.

The United States is one of the major participating countries. “First, I would like to congratulate Custodian of the Two Holy Mosques King Salman and Ministry of Culture and Information for professionally organizing this large event. We are very happy to participate in this major Saudi culture event because of its importance to our bilateral cultural relations,” US Cultural Attaché David Edginton told Arab News.

“The fair is a good opportunity for us and all participants and visitors to exchange ideas and information freely,” Edginton said.

The ministry has set strict rules to protect intellectual property at the fair. Other rules include warnings against displaying or selling any books or cultural materials not approved by the ministry.

Wonderful! A book fair that the US supports and that teaches Arab readers about other cultures, politics and technology! 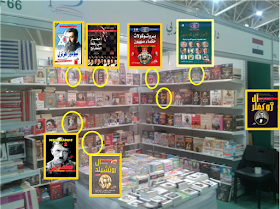 Lots of other book covers show Stars of David and masonic symbols, not to mention radical leftist icons. And other books not listed here include Jewish conspiracies.

The US attache David Edginton tweeted at least two photos from the fair, one of him at the opening ceremony and one showing Joey (presumably his son) selling books. US Deputy chief of mission Timothy Lenderking was also at the fair.

Why didn't the US look for obvious antisemitic booksellers before praising this book fair? It isn't as if this is the first time this kind of thing happened. But instead of making a stand, the US diplomats just turned the other way and believed the Saudi assurances that nothing offensive would be sold.

Well, nothing offensive to the Saudi regime, at least.

It is way past time for the US to act against explicit antisemitism in the Arab world as was seen by hundreds of thousands of attendees at this fair. As it stands, it appears that the US condones it.

I contacted David Edginton and asked him about this twice on Sunday, but have yet to receive a reply.

We have lots of ideas, but we need more resources to be even more effective. Please donate today to help get the message out and to help defend Israel.
Elder of Ziyon at Monday, April 04, 2016
‹
›
Home
View web version