What everyone missed about the "AIPAC Trump kippot" story 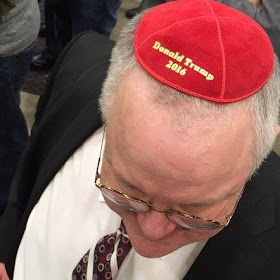 A small story from the AIPAC conference last week attracted some major attention.

Haaretz, the New York Post , Politico and Arutz-7 all had the story that originally came from the Washington Free Beacon:

If yarmulke sales are any indication of voter attitudes, Donald Trump was the clear winner at AIPAC on Monday night.

Daniels said he was “inundated” with requests for the Trump yarmulkes from conference-goers and sold out almost immediately.

“I totally underestimated the degree of support that Jewish people who are attending this event have for Trump,” said Daniels, who runs an online yarmulke shop called Marc’s Garden Jubilee. “I probably had about 50 inquiries for Trump yarmulkes that I could not fulfill.”

Daniels said he sold two or three Ted Cruz yarmulkes and three or four for John Kasich. By 8 p.m. on Monday, the vendor said he only had Hillary Clinton and Bernie Sanders caps left over, and was finding those tougher to unload.


So, this is probably not scientific, but the yarmulke market has spoken: the Orthodox Jewish vote is committed to Trump. Because, unlike a button or a sticker, a yarmulke requires a special dedication, which means that, as Daniels put it, “If someone is going to buy a yarmulke, you have to assume they support the candidate.”


But there is something that everyone is missing.

A Donald Trump kippah is a perfect thing to wear on Purim, when people look for the funniest costumes and accessories. It is far funnier than a Ted Cruz or even Bernie Sanders yarmulka would be. (I saw someone with a Donald Trump wig on Purim.)

To say that this is proof of Orthodox support for Trump is not to know how to read a calendar.

It is true that American Haredi Jews seem to like Trump, but they are not the type that would ever wear a red kippah (except, again, on Purim) and very few would go to AIPAC. Among modern Orthodox Jews who are likely AIPAC attendees, a Trump kippah would be a perfect, relatively inexpensive last-minute Purim costume.

To give an idea of how outrageous Purim costumes could be, there was brief panic in a Paris synagogue during Purim when someone dressed as a jihadist with a fake Kalashnikov entered and shouted "Allahu Akbar!" The congregants then realized that they know the man and laughed, but it was probably not the smartest idea.

We have lots of ideas, but we need more resources to be even more effective. Please donate today to help get the message out and to help defend Israel.
Elder of Ziyon at Saturday, March 26, 2016
‹
›
Home
View web version