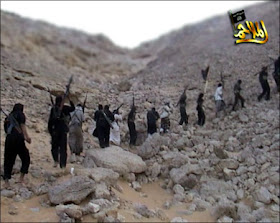 Palestine Press Agency reports that Hamas has arrested a large number members of the Al-Tawhid Brigades over the past two days.

The Al Tawhid Brigades is made up of former members of the Nasser Saladin Brigades of the Popular Resistance Committees.

Sources say that Hamas confiscated a large number of weapons and missiles including rockets that could reach Tel Aviv.

The campaign by Hamas waged against the Tawhid Brigades came immediately after the meetings between Hamas and Egyptian intelligence services meant to limit the influence of jihadists fighting Egypt in the Sinai.

(There is another Tawhid Brigades group that fights in Syria but is unrelated with this one.)

The Saladin Brigades do cooperate closely with Hamas, but they also get support from Iran. Either the Tawhid Brigades are a more extremist Islamist offshoot, or perhaps Hamas is using the meeting with Egypt as an excuse to crack down on rogue terror groups that are not firmly in Hamas' camp.

Meanwhile, there are reports that two prominent Hamas Qassam Brigades members have defected and gone to Egypt, with their families, to fight on the side of the Islamic State,

We have lots of ideas, but we need more resources to be even more effective. Please donate today to help get the message out and to help defend Israel.
Elder of Ziyon at Tuesday, March 22, 2016
‹
›
Home
View web version