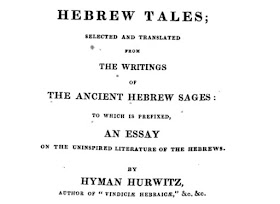 From Hebrew Tales, by Hyman Hurwitz, 1826, a collection of midrashim and other old Jewish stories translated to English and embellished.

"No person," said Rabbi Joshuah, "ever conquered me (in wit), except two children,— a little girl and a widow." He then related the following tales.

Once on my travels, I came near a town where the road separated to right and left. Not knowing which to take, I enquired of a little boy who happened to be there, which of the two led to the town. "Both," replied he; "but that to the right is short and long — that on the left is long and short." I took that on the right; but had not Tar advanced, when my progress was stopped by a number of hedges and gardens. Unable to proceed, I returned, and asked the little fellow, how he could be so cruel as to misdirect a stranger? "I did not misdirect thee," replied the boy. "I told thee what is true. But art thou a wise man amongst Israel, and canst not comprehend the meaning of a child? —It is even as I said. This road is the nearest, but still the longest, on account of the many obstructions. Unless thou wouldest trespass on other people's ground, which I could hardly suppose from so good a man. The other road is, indeed, more distant, but it is, nevertheless, the shortest, being the public road; and may, therefore, be passed without encroaching on other people's property."—I admired his wit, and still more his good sense, and went on.


Arriving in the city, I met another little boy carrying a covered dish. "What hast thou in that dish, child?" demanded I. — "My mother would not have covered it, master, had she been willing that its contents should be known;" replied the little wit! — and went on.*

The Little Girl kind and witty.

Another time, during my travels, I came near a well, where a little girl was drawing water. Being very thirsty, I asked for a draught. She handed me the pitcher.— "Drink," said she, "and when thou hast done, I will draw some for the beast on which thou ridest."

I quenched my thirst, and the good girl gave some to the poor animal. As I departed, I said, "Daughter of Israel! thou hast imitated the virtuous example of our good mother Rebekah.

"—"Rabbi," said the little girl, (with a smile, that indicated the most kindly feelings, and that the reply was a mere play of wit.)—" Rabbi, if I have imitated the example of Rebekah, thou hast not imitated that of the faithful Eliezer."*

* And it came to pass, as the camels had done drinking, that the man (Eliezer) took a golden ear-ring of a half shekel weight, and two bracelets for the hand, of ten shekels weight of gold (and gave them to her). Gen. xxiv. 22.

I Happened once to take up my lodging at the abode of a widow. She prepared something for my dinner, which she placed before me. Being very hungry, I eat the whole, without leaving the customary remnant for the servants.* The next day I did the same. The third day, my hostess, wishing to make me sensible of the impropriety of my conduct, so overseasoned the dish she had prepared for me, that it was impossible to eat it. Ignorant of what had been done, I began to eat ;but finding the food so very salty, I laid down the spoon, and made my repast on bread. "Why eatest thou not of what has been prepared for thee?" asked my hostess. — "Because I am not hungry," answered I. —" If so," rejoined she, "why eatest thou bread I Do people eat that by way of desert. — But," continued she, with a significant smile, "I can perhaps guess thy motive. Thou leavest this for the poor servants whom thou didst, yesterday and the day before, deprive of their due! Is it not so Rabbi?" I was humbled, and I acknowledged my fault.

* It Was a custom amongst the ancient Hebrews to leave a portion in the plate for the use of the waiters or servants, that they might partake of the same food as the rest of the family.
T. Erubin.
Medrash Echoh.

This interesting story follows, from which Arthur Conan Doyle possibly owes a debt.

The Athenian and his one-eyed Slave.

An Athenian went to study at Jerusalem. After remaining there three years and a half, and finding he made no great progress in his studies, he resolved to return. Being in want of a servant to accompany him on his journey, he went to the market-place and purchased one. Having paid the money, he began to examine his purchase more closely, and found to his surprise that the purchased servant was blind of one eye. "Thou blockhead," said he to himself—" see the charming fruits of thy application. Here have I studied three years and a half, and at last acquired sufficient Avisdom to purchase a blind slave !" — " Be comforted," said the person that sold the slave; "trust me, though he is blind of one eye, he can see much better than persons with two." The Athenian departed with his servant. When they had advanced a little way, the blind slave adr dressed his master—"Master," said he, "let us quicken our pace, we shall overtake a traveller, who is some distance before us." "I can see no traveller," said the master.— "Nor I," replied the slave; "yet I know he is just four miles distant from us." — "Thou art mad, slave! How shouldest thou know what passes at so great a distance, when thou canst scarcely see what is before thee?" — "I am not mad," replied the servant, "yet it is as I said; nay, moreover, the traveller is accompanied by a she-ass, who like myself is blind of one eye: she is big with two young, and carries two flasks, one containing vinegar, the other wine." "Cease your prattle, loquacious fool,"—exclaimed the Athenian. — "I see, my purchase improves: I thought him blind only; but he is mad in the bargain."—" Well, master," said the slave, "have a little patience, and thou wilt see I have told thee nothing but the truth." They journeyed on, and soon overtook the traveller; when the Athenian, to his utmost astonishment, found every thing as his servant had told him; and begged him to explain how he could know all this without seeing either the animal or its conductor.—"I will tell thee, master," replied the slave. "I looked at the road, and observing the almost imperceptible impression of the ass's hoofs, I concluded that she must be four miles distant; for beyond that, the impression could not have been visible. I saw the grass eaten away on one side of the path, and not on the other; and hence judged she must be blind of one eye. A little further on, we passed a sandy road, and by the impression which the animal left on the sand where she rested, I knew she must be with young. Further, I observed the impressions which the liquid had made on the sand, and found some of them appeared spungy — whilst others were full of small bubbles, caused by fermentation, and thence judged of the nature of the liquid." The Athenian admired the sagacity of his servant, and thenceforth treated him with great respect.

We have lots of ideas, but we need more resources to be even more effective. Please donate today to help get the message out and to help defend Israel.
Elder of Ziyon at Sunday, March 20, 2016
‹
›
Home
View web version