PA cuts off salaries of a few dozen Hamas terrorists 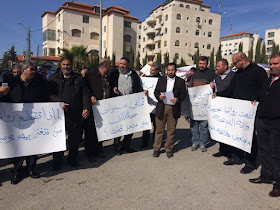 If any part of the PA budget is sacred, it is the part that pays the salaries of terrorists in Israeli prison, former prisoners, and their families. Some 6% of the PA's budget goes towards rewarding terror.

So this story, which did not get any publicity in English, is most interesting.

A few dozen former prisoners protested that their salaries were cut by the PA. According to the article, some 70 terrorists have been cut off from the Western-funded gravy train of welfare for terrorists.

According to reports, the reason is because they are members of Hamas who refuse to accept the legitimacy of the Fatah-led PA government.

The PA's official response was that these protesters were criminals (I'm not sure if they mean that they violated Palestinian law or if they were jailed in Israel for criminal, not terrorist, activities.)

The protesters denied that they were criminals and said "all the prisoners whose salaries have been cut are honorable people of this country who spent the prime of their youth in Israeli jails, in defense of the Palestinian cause."

The protesters threatened a hunger strike if their demands aren't met.

The article helpfully confirms that "According to Palestinian law, any prisoner who has spent time in Israeli jails for more than 5 years has the right to a salary and he is assured of a job."

And the world wants to give legitimacy to a state that by law hires terrorists for do-nothing jobs. The word "corruption" doesn't describe this because it is not being hidden at all - they are proud of it.

This blog may be a labor of love for me, but it takes a lot of effort, time and money. For over 11 years and over 22,000 articles I have been providing accurate, original news that would have remained unnoticed. I've written hundreds of scoops and sometimes my reporting ends up making a real difference. I appreciate any donations you can give to keep this blog going.