Israel now more allied with Egypt than America is 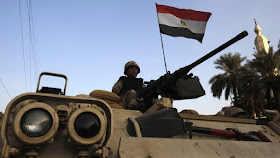 
Israel has been giving the Egyptian military a free hand to operate in northern Sinai against local jihadist groups, voluntarily ignoring an annex to the 1979 Camp David Peace Accords banning the presence of significant Egyptian forces in the area, an Israeli official told The Times of Israel on Thursday.

According to the military annex of the Camp David accords, Egypt is allowed to maintain a civilian police force only in the eastern strip of the Sinai Peninsula, where the majority of local jihadists are currently located. Following Israel’s disengagement from the Gaza Strip in 2005, the Egyptian army was allowed to deploy a border patrol battalion along the border with Gaza.

An official told The Times of Israel in 2014 that due to the challenges facing the Egyptian military in the northern Sinai, “In practice, the military annex is nonexistent.”

With fighting between the Egyptian army and jihadists pledging allegiance to the Islamic State intensified this week following a coordinated attack against army positions in northern Sinai Wednesday, the official, who spoke on condition of anonymity, acknowledged that Israel has maintained its policy of ignoring the peace treaty’s military annex for the benefit of Egypt’s war on terror.

Unlike the United States, which continues to place immense hurdles on the Egyptian army before authorizing the delivery of “a few crummy F-16s” — the official quoted his disgruntled Egyptian counterparts as saying — Israel has allowed the Egyptian army to do as it pleases in northern Sinai without hesitation, realizing the common interest in its fight on terror.

“It took one phone call from Cairo to Jerusalem to authorize whatever Egypt wants in Sinai, counter to the military annex,” he said.

“Israel understands the challenge facing Egypt. We face the same challenge,” he added. “We aren’t worried that Egypt may attack Israel, nor are they worried that Israel will attack them… it is clear to the [Egyptian] leadership that not only is Israel not an enemy, it’s an ally.”

The most populous Arab nation is now a de facto ally of the Jewish state.

This doesn't mean that there will ever be normalization between the two countries, but this is the best Israel can hope for with all its neighbors.

Haaretz goes further, but this report seems too far-fetched unless Egypt's army is really against the wall:


An Egyptian source familiar with Egypt’s decision-making process told Haaretz that if Islamic State comes near Gaza, President Abdel-Fattah al-Sissi may “invite” the Israel Defense Forces to act against it. This will not be seen as an Israeli breach of Egypt’s sovereignty, because Gaza falls under Israel’s responsibility.

“The two armies may already be coordinating in preparation for such a possibility,” the source said. “The Egyptian problem is that a military campaign inside Gaza could lead to breaking down the fences and a mass flight of civilians from Gaza to Sinai.”