Obama bends over backwards to deny the truth about Islamic terrorism 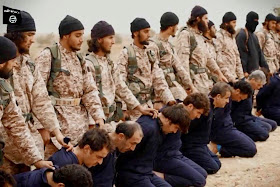 President Obama's speech on Thursday at the at the "Summit on Countering Violent Extremism" had little to do with countering extremism. Instead, it concentrated on a theory that is provably false: that violent extremism is the result of Western policies and attitudes, not the Middle Eastern mindset.

His fatal assumption is that Middle East Muslims think the same way that everyone else in the world does. When terrorists and their apologists say that they are violent because of Western polices, he believes them, instead of being skeptical of the words of terrorists.

While we are used to his naivete, it is still stunning that he is building his anti-terror strategy on believing the lies of the terrorists.

We must address the grievances that terrorists exploit, including economic grievances. As I said yesterday, poverty alone does not cause a person to become a terrorist, any more than poverty alone causes someone to become a criminal. There are millions, billions of people who are poor and are law-abiding and peaceful and tolerant, and are trying to advance their lives and the opportunities for their families.

But when people -- especially young people -- feel entirely trapped in impoverished communities, where there is no order and no path for advancement, where there are no educational opportunities, where there are no ways to support families, and no escape from injustice and the humiliations of corruption -- that feeds instability and disorder, and makes those communities ripe for extremist recruitment. And we have seen that across the Middle East and we've seen it across North Africa. So if we’re serious about countering violent extremism, we have to get serious about confronting these economic grievances.

...We have to address the political grievances that terrorists exploit. Again, there is not a single perfect causal link, but the link is undeniable. When people are oppressed, and human rights are denied -- particularly along sectarian lines or ethnic lines -- when dissent is silenced, it feeds violent extremism. It creates an environment that is ripe for terrorists to exploit.

...And finally, we have to ensure that our diverse societies truly welcome and respect people of all faiths and backgrounds, and leaders set the tone on this issue.

Groups like al Qaeda and ISIL peddle the lie that some of our countries are hostile to Muslims. Meanwhile, we’ve also seen, most recently in Europe, a rise in inexcusable acts of anti-Semitism, or in some cases, anti-Muslim sentiment or anti-immigrant sentiment. When people spew hatred towards others -- because of their faith or because they’re immigrants -- it feeds into terrorist narratives. If entire communities feel they can never become a full part of the society in which they reside, it feeds a cycle of fear and resentment and a sense of injustice upon which extremists prey. And we can’t allow cycles of suspicions to tear at the fabric of our countries.

In Europe, there are 2.5 million Indians, 2 million Armenians, 2 million Kurds, 1 million Chinese, half a million Filipinos. They live in the same societies as the Arabs and other Muslims in Europe. They have the same challenges. Yet for some strange reason, all these groups that suffer the same discrimination and the same political impotence and the same economic disadvantages as the Muslims do not join "violent extremist" groups.

If Obama's logic holds, then why do the terrorists, by and large, all say they subscribe to only one faith that we are assured has nothing to do with the violence?

I am not saying that Islam itself causes violence. But there is something that attracts millions of Muslims worldwide to extremist positions, that is apparently missing in all other belief systems. And none of Obama's theories fit that simple fact.

I think the answer can be found in the Graeme Wood article I highlighted earlier this week.

Islam has never officially reformed since it was founded. There is no solid theological basis to say that the things that Mohammed allowed - slavery, beheadings, crucifixions - are no longer permitted. ISIS' theology attracts people because it claims to be pure, original Islam, and that position cannot be argued with using authentic Islamic texts. There are ways to slowly evolve the religion baked into Christianity and even Orthodox Judaism, but there is no such mechanism in Islam.

Indeed, Islam is the problem because it never formally left the seventh century. Muslim moderates are Muslim heretics and Muslim literalists are Muslim terrorists (or supporters.)

This is not a problem that the West can solve by taking the blame for the terror. Of course there shouldn't be discrimination against Muslims and they should be encouraged to integrate into Western society and adopt Western mindsets, but that will do nothing to solve the real problem.

What the West can do is to ensure ISIS and Al Qaeda and Hezbollah and the Taliban and Islamic Jihad  and Boko Haram lose all their battles decisively, and painfully. Muslims are attracted to "the strong horse" and when these terror organizations are perceived as victors is when recruitment soars. Only by pulling all the stops can the West re-assert its clear military dominance, and that would discourage recruits to Islamist organizations.

Plenty of suicide bombers have had university educations. It is way past time to blame poverty and discrimination for terrorism. The answers can be found in original Quranic Islam and in the psychology of the Middle East peoples.