Yesterday, I pointed out a false Ma'an story claiming that Israel deliberately opened up "dams" to flood Gaza with excess rainwater. As I pointed out, there are no dams near Gaza; there are some reservoirs but no evidence that they released any water.

This is one of those obvious lies that start getting believed by being repeated year after year, and even AFP ended up reporting that Israel opened up dams without doing a modicum of fact checking. ("Journalist" Max Blumenthal repeated the lie as well, as did Radio France International.)

Today, the claims were proven to be lies, as CAMERA reports:

Regarding the claim that Israel opened dams, thereby flooding Gaza, a spokesman for the Coordinator of Government Activities in the Territories (COGAT) told CAMERA:


The claim is entirely false, and southern Israel does not have any dams. Due to the recent rain, streams were flooded throughout the region with no connection to actions taken by the State of Israel.

Prior to the storm, the Coordinator of Government Activities in the Territories allowed the transfer of four water pumps belonging to the Palestinian Water Authority from Israel into Gaza to supplement the 13 pumps already in the Gaza Strip in dealing with any potential flooding throughout the area.

In addition, Nechemia Shahaf, the head of the Drainage Authority for the Shakma-Besor Region, confirmed to CAMERA that there are no dams which can be opened and closed in southern Israel. Shahaf said, "There is a diverting dam one meter high which directs water to reservoirs. This is a low dam which cannot be opened or closed." He also noted that the singular dam, which cannot be opened, is next to Kibbutz Gvulot, and approximately 20 kilometers away from Gaza.

But that was only one of the false stories claiming that Israel floods Palestinians. 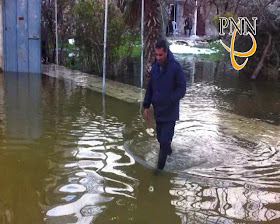 Aida camp is adjacent to the Israeli apartheid wall, which is backed by the Gilo settlement northwest, that opened the barrages to flood the homes of refugees.

The head of water pumps in the camp, Sami Hmedan, said that Israeli occupation authorities opens the barrage water with disregard to the Palestinians and without any official concerns.

The only "barrage" between Gilo and Aida is the security barrier. If anything, that protected Aida from excessive flooding.

Or are they saying that those devious Israelis removed the "apartheid wall" to flood Arabs and then quickly put it back?

Who knows what crazy slander they will come up with next. But we do know that a percentage of those lies will end up in AFP and other mainstream media, because if there is something that Palestinian Arabs have learned over the years, it is that repeating their lies gets results.