Arabs tell everyone they are planning violent riots in Hebron, and pre-emptively blame Bibi 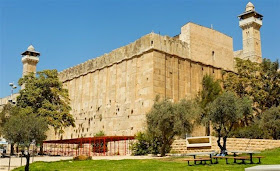 Throughout the years, Palestinian Arabs and their apologists have justified all of their acts of violence as "natural reactions" to things Israel does.

Palestinian officials say the Israeli prime minister's plan to visit the Ibrahimi Mosque in Hebron is a "time bomb" that could drag the area into more violence and disorder.

Hebron's mayor, Kamel Hmeid, called upon the foreign ministers of six member countries in the Temporary International Presence in Hebron to hold an emergency meeting to protect residents from Benjamin Netanyahu's plans.

The visit to the Ibrahimi mosque, known to Jews as the Cave of the Patriarchs, will take place March 3, one week before the Israeli Knesset elections and close to the anniversary of the massacre in which 29 Palestinians were killed and dozens were injured when an Israeli settler opened fire at worshipers.

A Palestinian security source told Ma'an that "Netanyahu lit the wick of a big bomb in Hebron, and we do not know when or where it will explode."

"Residents of Hebron are preparing to commemorate the 21st memory of the Ibrahimi Mosque's massacre on Friday between the H1 and H2 parts of the Hebron," he added.

"Clashes with Israeli soldiers will surely erupt on contact points following the marches."

The source, who spoke on condition of anonymity, added: "We expressed our fears of this visit to the Israeli side and we hold them responsible for the consequences."

Now, no one is saying that the Arabs of Hebron cannot hold peaceful demonstrations against Bibi.

However, this is not what they are planning. They are planning violence, and using that threat to try to stop Jews from visiting the second-holiest Jewish shrine.

I would be happier if Netanyahu visited Hebron more often and emphasized to the world its importance to Jews, rather than try to turn it into an elections stunt. This visit doesn't feel sincere. It very possibly will backfire on him in Israel.

Still, threats of violence are considered normal and indeed part of the fabric of PalArab society. It is something that is hardly worth mentioning anymore. And that, perhaps more than anything else, is what ends up hurting the Palestinian Arabs themselves - they proudly brag that they cannot act like adults, and the world treats them that way.