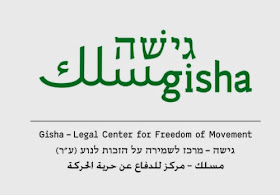 Last month, I noted that Gisha, the Israeli NGO that pretends to care about freedom of movement of people and goods to and from Gaza, had never said anything bad about Hamas.

This even though Hamas was routinely stymieing movement to and from Gaza, which is exactly what Gisha supposedly cares about. Specifically, I noted a widely reported story of how Hamas didn't allow some 37 orphans to leave Gaza to go to Israel, which Israel gave approval for.

I noted that Gisha, funded from European dollars, was taking an interesting position by ignoring Hamas violations of freedom of movement while concentrating on Israeli and (to a lesser extent) Egyptian restrictions.

Lo and behold, two days after I wrote my article, Gisha wrote its first extraordinarily mild scolding of Hamas for this same story. Although it couched it as a minor infraction compared to Israeli restrictions, Gisha reluctantly wrote:


According to the most recent data released by the Palestinian Central Bureau of Statistics, 43.2% of Gaza residents are children under the age of 14, which is slightly more than 750,000 children. Around 1,500 of them are newly orphaned since the fighting last summer. Hamas’s decision prevented 37 of them from receiving a rare opportunity to leave the Gaza Strip, since Israel allows Palestinians to exit only if they meet a strict set of criteria. Most Palestinians who receive approval to exit are medical patients and those accompanying them, merchants and a handful of “exceptional humanitarian cases”. Given this, it’s unfortunate that Hamas officials also obstruct travel for political reasons.

"Unfortunate!" Oooh, that must have hurt! But it is important to protect your funding sources, and we cannot have European governments asking uncomfortable questions about why Gisha refuses to ever say anything bad about Hamas. Better to write the barest minimum possible against Hamas so if anyone does ask a question, Gisha can answer, "Look! See? We did it! We're objective! Please keep our funding going!"

Sheer coincidence that the first negative thing Gisha seems to have ever written on its own about Hamas (not quoting other sources) happened right after I pointed this out.