"Santa Claus saved Palestinians from the Jews during the Nakba" 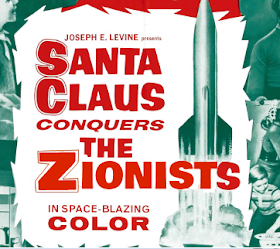 Joe Catron is a member of the International Solidarity Movement and also an active Hamas supporter (once hilariously defending the terror group as pro-women and having a "liberal element")  tweeted this last night:


The link goes to an article about the "real" St. Nicholas and how he even today protects the residents of Beit Jala, where is lived for a few years in the fourth century:


When raiding invaders surrounded Beit Jala, attacking it, the townsfolk bravely defended the city. Everytime the attackers tried to take the town an Old Man1 with a lance or spear stopped them in their tracks. It seemed as if even the olive tree branches were beating the invaders back. The raiders later told that the townspeople's bullets had little effect, it was the Old Man who never allowed them to move forward and take the town. An so it was Saint Nicholas who saved Beit Jala.

This protection was repeated again during World War I and II, when it is said that St. Nicholas stretched out over the village, protecting the people.

Locals also report that he was seen with hands outstretched, catching bombs aimed at Beit Jala following the State of Israel's 1948 declaration of independence. Many residents took refuge in the church and once again St. Nicholas was seen to block bombs from destroying the church, protecting the people. One resident says, "No bombs reached Beit Jala. Only the tower of the St. Nicholas Church was damaged. We know it was St. Nicholas that saved Beit Jala from any problems."

Benny Morris' histories of the 1948 war do not mention any battles in Beit Jala.

During the second intifada, members of Fatah's Tanzim group took over many Christian homes and buildings to shoot at the Jewish neighborhood of Gilo. At least once they directly attacked a Christian leader of the town.