You would think that the media would know by now.

Comedian Sarah Silverman made a rare appearance in the middle of a hot political dispute Thursday (Dec. 18) when she attended a Hanukkah menorah lighting alongside a group of Jewish feminists at the Western Wall, Judaism’s holiest site.


The Independent (since corrected, via CiFWatch): 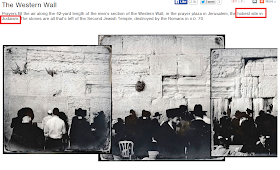 It isn't that hard to find out the truth, even if you are a lazy reporter.